Skip to content
H. R. Giger will Live on in Our Nightmares
Editorials

H. R. Giger will Live on in Our Nightmares

by Jason Koenigsberg H.R. Giger has passed away. You may not be familiar with his name but if you have ever seen a film from the Alien franchise you are familiar with […] 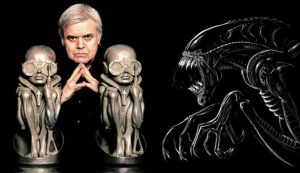 H.R. Giger has passed away. You may not be familiar with his name but if you have ever seen a film from the Alien franchise you are familiar with his work. He is one of the most influential artists of the fantasy realm and his work personally affected my interpretation of what great and haunting set design should look like in dark science-fiction and his vision did wonders for my imagination after I first saw Ridley Scott’s 1979 masterpiece Alien in my mid-teenage years. 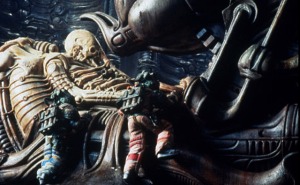 I remember getting lost in the beautiful and unsettling spaceship that looked more like a perfectly sculpted cavern from another world that was both tantalizing and begging us to explore it deeper, yet at the same time foreboding and giving the viewer the feeling in the pit of their stomach that they should turn back or run away. It was as if we were entering the belly of a giant beast along with the entire doomed crew of the “Nostomo”. His work was simultaneously alluring as it invited us into explore a new world and was equally ominous and threatening. 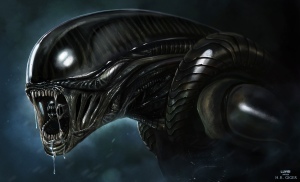 One of his most indelible marks on science-fiction was his creation of the actual alien creature in Alien also known as a xenomorph. It remains an iconic monster of cinema which has been influential and terrifying ever since it first appeared on screen in 1979. In time H.R. Giger’s horrifying Alien will become as legendary as any of the classic Universal monsters like Dracula, the Wolfman or Dr. Frankenstein’s creation.

Along with his Academy Award winning art design and visual effects from Alien, H.R. Giger also created many works of art which are on display at the H.R. Giger Museum in his home country of Switzerland. Along with designs that he sculpted for musicians like Danzig, Ibanez guitars and most notably Korn frontman Jonathan Davis’ mechanical-erotic microphone stand.

His work was beautiful and unsettling and it conjured up visions that we will never be able to forget. One of the most distinctive artists of the latter part of the twentieth century, Giger’s craftsmanship will live on in the motion pictures we can watch over and over, and more importantly in the dark side of our minds enhancing our imaginations.