‘Southpaw’ is Heavy Handed on the Cliché’s, Lacks Emotional Punch 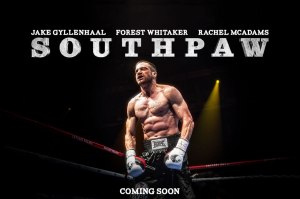 Boxing movies are responsible for the best sports dramas of all time. From Rocky (1976) to Raging Bull (1980) to Million Dollar Baby (2004), boxing has captured emotional moments better than just about any other sport on film. Southpaw unfortunately fails greatly at accomplishing that and falls very short of the films mentioned above.

We see the opening shot of Jake Gyllenhaal as Billy Hope getting his left hand wrapped before a fight (get it, south paw), not the most creative but a nice way to open the film nonetheless. From there we move onto a fight that Gyllenhaal’s character wins. That is one aspect of Southpaw I can easily commend. The fights scenes look great. They are expertly shot and choreographed with great cinematography that really makes outstanding use of the vibrant colors and bright lighting. Antoine Fuqua (the director of Training Day and The Equalizer) really does a great job with the fight scenes. I wish the whole movie was nothing but boxing matches.

Regrettably, Mr. Fuqua is a talented but highly inconsistent director and between the boxing scenes he had to direct a script that was a bad melodrama worthy of the Lifetime Network. The story circle’s around Gyllenhaal’s Billy Hope and every character other than his is a one-dimensional cliché that is used to simply move the story forward and serves no other purpose. His daughter, by newcomer Oona Laurence, the social worker played by Naomie Harris and his Mr. Miyagi-like trainer played by Forest Whitaker are all just shameless plot devices.

Rachel McAdams has a small role as Gyllenhaal’s wife Maureen and is the emotional core of the film. Much to our disappointment, when she leaves the film a lot of the emotional impact goes with her. Also I found McAdams to be miscast. She does a serviceable job but never had me convinced she was that character nor that she would be married to a tough fighter from the streets. She never shed her Hollywood starlet persona, which is a real travesty since she has done a great job of getting rid of that hoity toity image on HBO’s second season of True Detective. For this I blame the screenwriter and the director. As I stated earlier, this felt like a Lifetime melodrama with a Grade-A cast. All except for Curtis ’50 Cent’ Jackson, he was horrible playing a soulless Don King-esque boxing promoter. I did not buy it for a second.

Another major problem that Southpaw suffered from was the fact that a lot of the plot points have been ruined by the previews. This movie could have had far greater emotional impact if some of the big dramatic moments came as a surprise and not something the audience expected because we knew it would happen from the trailers.

Plus, this film features one of the last scores from the great James Horner who died tragically in a plane crash one month ago. The music is very good and compliments a lot of the scenes well, never feeling too ham-fisted or distracting.

The best part of Southpaw is Jake Gyllenhaal. He follows up his career best performance in last years Nightcrawler with another powerful turn. The biggest tragedy being that this script was not worthy of his talented and nuanced performance as Billy Hope. He transforms his body into looking like a professional fighter and his performance tries to focus on the flaws of a man similar to DeNiro as Jake LaMotta in Scorsese’s boxing drama Raging Bull (1980). As great as Gyllenhaal is, he is not good enough to transcend the shortcomings of Southpaw.

The final verdict is that Southpaw has some aspects that are commendable with its fight scenes and Jake Gyllenhaal continues to challenge himself and delivers a great performance. But in the end the actors deserve better and so do you.

Below is the trailer for Cinderella Man (2005) the last great boxing movie to have a huge emotional impact on me. See this instead of Southpaw.