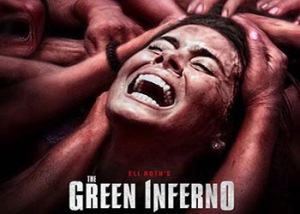 After an over year long delay, Eli Roth’s long awaited cannibal film The Green Inferno arrives in theaters this weekend. It has obvious influence from violent exploitation horror movies from the ’70’s and ’80’s most notably the infamous Cannibal Holocaust (1980). Eli Roth has made a nice little niche for himself as a splatter horror director who specializes in xenophobic terror after Hostel (2006). His Green Inferno plays like Cannibal Holocaust‘s less brutal, politically correct cousin.

The film opens up in the rain forest where we see a giant crane destroying the jungle as natives look on, suggesting that the more civilized society are the real evil in this picture. We then move to New York City and see privileged white college students protesting, obviously heavily contrasting the two worlds with a lot of American stereotypes, modern technology and first world problems.

The beginning of the film is a little long and boring, it felt like it took a while to finally get to the Peruvian jungle and even when the main characters arrive it takes longer than you might expect for them to face the peril we know they encounter. Early on when we get to South America Eli Roth shoots the locals even outside of the Amazon jungle in a ominous and negative lens. The Green Inferno sends an interesting message at first. Once they meet a tribe of cannibals it’s as if Roth is punishing the people who are trying to help and make a difference and rewarding those who chose to ignore taking a part in activism and focus on their own needs at home. It’s saying don’t help others in need and to be selfish. But as the film progresses its moral evolves into something else.

The acting was bad, but it usually is in most of these types of horror movies. We do not care about any of these characters no matter how much we know about them in the first two acts of the movie. Lorenza Izzo does a serviceable job as the main heroine, everyone else around her we really do not get to know much about, nor do we really care.

So far this might read as a negative review, yet The Green Inferno has earned three stars so you might be scratching your head at this point. This film in all of its ineptitude is trashy fun. There are moments of genuine hilarity and as the film progresses, its third act emerges as very strong and changes what the audience thought the original moral was.

It’s gory killing of humans is meant to be taken as a parable for how we treat (or mostly mistreat) our animals that we rely on for food. The shots of cattle sitting around are not placed in the film at those exact points by accident. Unlike Cannibal Holocaust, it’s main influence, The Green Inferno is obnoxiously politically correct, even though it has some gruesome bloody scenes. Also unlike Cannibal Holocaust, its extremely feminist, at first with minor undertones and then more blatant, which is ironic considering the former is one of the least feminist movies ever made.

But then, The Green Inferno gets even smarter in the last few moments. Despite a largely unnecessary epilogue, the ending emphasizes that the college students we saw at the beginning are protesting for all the wrong reasons. It’s real message is one that is actually profound, as we are back in the urban jungles of New York and civilization near the end, we realize after all the carnage that was in the movie, that The Green Inferno says we are protesting for all the wrong reasons because we are so misinformed about other cultures and that America has its head up it’s rear end. A strong and poignant message, especially timely in our overly PC nation in 2015.