‘Creed’ Will Make You Believe in Continuing Rocky’s Legacy 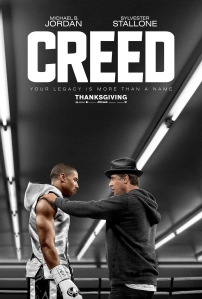 Sylvester Stallone’s Rocky has become etched into a part of Americana as being the ultimate underdog story and one synonymous with the American dream. It has a long legacy and has maintained its reputation as being one of the best sports movies of all time. Now with its newest sequel Creed, Stallone finally accepts his age and passes the torch to Michael B. Jordan as Adonis Creed, son of his late friend and fellow boxer Apollo Creed. Stallone’s iconic Rocky Balboa steps into the trainer role that Burgess Meredith played as Mickey back in the 1976 original Best Picture Winner. He is less cantankerous than Mickey and still has the same lovable qualities that Rocky has always maintained in the first film and all of its sequels.

Creed reunites director Ryan Coogler with star Michael B. Jordan. They last collaborated on the very powerful and topical Fruitvale Station (2013), compared to that film, Creed feels like a lot of fluff, and that’s what Creed is, but it sure is good looking fluff. Coogler uses some great tracking shots throughout the film, showing off his technical prowess with maneuvering the camera. He also knows how to shoot and edit a fight scene because the ones in Creed look great.

Michael B. Jordan does a very good job filling in Rocky’s boots (and Apollo Creed’s trunks) as the main protagonist of the story. He takes the role seriously and makes all the right moves both in and out of the ring. Tessa Thompson plays Bianca, Adonis Creed’s love interest, and she does a very good job making what could have been a forgettable utility character seem real and has some very good emotional scenes. Stallone himself is probably the best performance to savor as Rocky. He plays the fictitious boxing legend as old and weathered as he should be, but unlike the last time we saw him in Rocky Balboa (2006) he never falls into playing the pugilist as a caricature .

The biggest downfall of Creed is its workman-like script. It opens up with some very shoddy dialogue and back story of the title character as a child fighting with boys in a juvenile prison and then it never really gets out of realm of being predictable comfort food, which is fine because as a sequel to Rocky (1976) that is probably what most of the audience wants and expects. Some of the dialogue is cheesy and the script at times feels forced but overall the acting, directing and editing make up for the screenplays shortcomings. The romantic scenes between Michael B. Jordan and Tessa Thompson feel genuine because the actors have chemistry which saves it from the terrible contrived plot device of her having a handicap simply to encourage our main character that even with a disability you should fight to achieve your dreams while you still can.

The best scenes in the film are the ones with Michael B. Jordan and Sylvester Stallone. It really is a pleasure to watch Stallone be humble and take a step back into a great supporting role and allow a younger actor to become the centerpiece of the franchise that he created. They both handle their scenes together so well that I forgave the script for its familiarity. Also, Rocky has a major health scare about half way through the film and I am relieved that the movie did not take the easy way out and go for the cheap emotional impact. Without revealing any major plot points, I will just say I was happy with the outcome of Rocky’s character and glad the filmmakers did not dupe the audience because of laziness.

Despite the intensity of some of the big scenes, Creed never packs the emotional wallop of Coogler’s previous film, and as good as Michael B. Jordan is, his performance never hits the same levels he did in Fruitvale Station. That being said, Creed is obviously a very different animal than Fruitvale Station and Ryan Coogler does a very good job giving you what you would expect when you buy a ticket to see Creed. Rocky sequels have been inconsistent throughout the years, even though the original has retained its classic movie status, its sequels are uneven, but this is one of the better sequels continuing the story of Rocky as it passes the torch to the next generation to an actor who can handle the dramatic scenes as well as the physicality of the role.