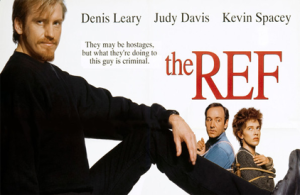 Christmas is right around the corner so why not stream one of Pan and Slam’s  Unconventional Christmas Classics. I chose The Ref because I feel it is the most under seen of the films mentioned in that article and it really succeeds as a funny satirical look at our holiday culture and also a very poignant and heartfelt story about problems many upper and middle class families go through. The Ref was a great vehicle for Denis Leary to introduce his comedic talents from his stand up special No Cure for Cancer to mainstream cinema. It also is an unexpectedly striking portrait of a suburban family as problems from a troubled marriage spill over into a troubled youth and his teenage angst is about to explode if his family stays the course that they appear to be on. Great supporting work from Judy Davis and Kevin Spacey, The Ref is not without its flaws, especially in the final scenes, but overall it is a smart, funny, tender, and honest unconventional holiday movie.

The Ref is currently streaming on Netlfix.