Skip to content
This Christmas, ‘Carol’ is the Most Beautiful Romance You Will Find in Cinemas
Movie Reviews

This Christmas, ‘Carol’ is the Most Beautiful Romance You Will Find in Cinemas 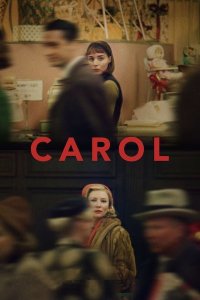 Todd Haynes is a filmmaker that demands great respect and admiration despite the fact that his movies tend to be often pretentious and with subject matter that can be found on daytime soap operas. His one true masterpiece, the Douglas Sirk inspired melodrama Far From Heaven (2002) which should have won Julianne Moore the Best Actress Oscar, now has a companion piece that is every bit as worthy as Far From Heaven. His newest film Carol is a beautifully shot and directed romance with two of the most talented actresses working today delivering two of their best performances.

The film opens up with an interesting gate pattern that looks like unusual prison bars but we do not know what it truly is until the camera moves back and pans up where we see it is a metal grill on the street as people’s feet are walking on the cement sidewalk next to it. The prison bar motif is one that continues throughout Carol since it is a story about women and their place in society during the 1950’s. At first this movie feels like a very standard melodrama with an obvious message. We all know that the ’50’s were oppressive to women and especially lesbians, which is the focal point of Carol. It was an oppressive time for all same-sex couples and minorities.

About twenty minutes into the movie it appears as if nothing special will come out of Carol, but that was when its story and its actors and the direction starts to really suck the audience into the film. Todd Haynes might be pretentious in some of his other work and he may write or choose scripts that are not interesting to certain demographics, but after seeing Carol, one cannot deny that he has a very keen eye as a director and is a master at crafting a visually beautiful motion picture.

There are so many great shots in Carol that resonate long after the film is over. Simple moments like a scene where Rooney Mara’s character Therese is on a bike sitting behind her “boyfriend” looking at nothing but his back as he talks about their future. A scene where Cate Blanchett’s Carol and Therese are in a car driving from Manhattan, through the Holland Tunnel into New Jersey was a particularly beautiful and revealing moment of our characters crossing over into a new chapter. So was a scene where Kyle Chandler, who plays Carol’s frustrated and confused husband, has the door closed on him and we see one of his eyes and less than a quarter of his face through a window on the door even after the lights go out. Or even smaller touches like Rooney Mara’s Therese looking at a train set and interacting so well with men and drinking beers with her male friends. So much is told through just the images in Carol it is a real treat and one of the most beautifully shot films of the year. The Christmas imagery was also a nice little touch and makes this even more special to see in theaters now.

This movie may sound like a retread of Brokeback Mountain (2005) for women with lesbians replacing the cowboys, but it is so much better than that. The costumes and cinematography are spectacularly well coordinated and compliment each other very well, making for a purposefully drab, gray color palette, where only the accessories of Cate Blanchett and Rooney Mara’s costumes have bright colors that really stand out and pop like a multi-colored hat, a yellow scarf, gold earrings or a red coat.

This movie will slowly draw you in and sweep you away with its visuals where at some point you will stop analyzing details and just sit back and enjoy the gorgeous direction and the expert performances. It is the acting that really drives Carol because that is what makes you care so much about these characters. Cate Blanchett, once again delivers a great performance, her best since her Oscar Winning turn in Woody Allen’s Blue Jasmine (2013). She plays the title character as a sultry femme fatale at first and then like an onion, slowly reveals more layers of deeper emotions and desires.

Rooney Mara gives her best performance since The Girl with the Dragon Tattoo (2011), she should have won an Oscar for that role, she won the Pan and Slam Best Actress Award, and there is no doubt that she should at least earn another Oscar nomination for her work in Carol. This is her most nuanced and heartfelt performance to date. Also, Kyle Chandler as Carol’s husband should be commended. He could have easily played it as a typical villain but instead made his character very relatable as someone who was frustrated and confused by what his wife was doing to their family and how he felt it was just not right. His lack of ability to comprehend her situation during the time of Eisenhower’s presidency makes his character more forgiving than it could have been. His line of “it shouldn’t be like this” makes his pain seem understandable and just one of the many small elements that add up to making Carol one of the best films of the year.