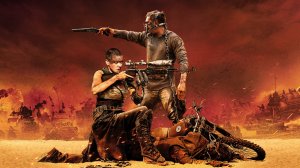 The Academy Award nominations were announced last Thursday and many of the nominees were pretty much what we expected. A few surprise snubs (Ridley Scott left out of Best Director for The Martian was the biggest glaring omission) but overall they were mostly what we already knew. That being said, the one title that really does not fit as an “Oscar movie” is George Miller’s action packed, futuristic masterpiece Mad Max: Fury Road. I saw this film back in June when it was first released and it has only grown on me. I kept thinking about how much fun and how brilliantly nihilistic and blisteringly entertaining it was. Upon revisiting my review of the film I realized that I had made a mistake, not with the review itself, the words I wrote about Mad Mad: Fury Road I still stand by, it was with my star rating. I gave it three stars but my description of the film is more worthy of a four star review. This really is that impressive of a film that it truly deserves the highest rating possible.

Around December I was very happy to see it make its way onto many critics top 10 lists and it has already earned many well deserved awards and nominations I was thrilled to see that now the Academy has recognized it as one of the very best films of 2015 with ten nominations including Best Picture and Best Director for George Miller. He has constructed a smart and highly kinetic film that was the most purely cinematic experience of 2015. It was like he made a film that was as universal as the Looney Tunes cartoons of Wile E. Coyote and his never ending chase to catch the Roadrunner.

Since it premiered on HBO last week I have re-watched the movie several times and it has only grown in my appreciation and admiration of it. This is without a doubt one of the best movies of the year, or any year for that matter. If you missed it in theaters, that is a real shame, but it holds up just as well on TV. See Mad: Max Fury Road, and then when it’s over, you’re going to want to immediately see it again.

Mad Max: Fury Road is currently streaming on HBO GO. Click below to see the best and most exciting trailer for any film in 2015.