‘Everybody Wants Some’ is ‘Dazed and Confused’ for the Early 80s

Movie Review: ‘Everybody Wants Some!!’ 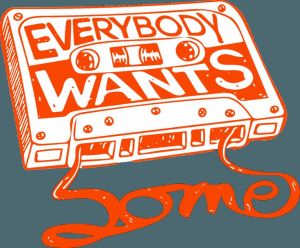 The eighties were a great time and in these tweens people really love nostalgia from the ‘Me’ decade. Just look at how many remakes and reboots we have seen in theaters of properties that were born in the 1980’s. Just last year we saw new Terminator, and Vacation movies and even Jem and the Holograms get feature length treatment and this trend shows no signs of slowing down with a new Ghostbusters movie due this summer. Writer/Director Richard Linklater has been on a career high lately with his last two films Before Midnight (2013) and Boyhood (2014) and he decided to revisit 80s nostalgia his way, by reliving his college years, similar to what he did with the 70’s and high school with Dazed and Confused (1993). Everybody Wants Some does not disappoint and continues Linklater’s hot streak. The movie feels like a two hour leisurely walk down memory lane.

The opening shot is of a tape deck in a car playing “My Sharona”. This sets the tone perfectly. For the entire movie the audience is treated to authentic costumes, set design, and a soundtrack that all hit the bullseye with exactly the era Everybody Wants Some attempts to create and captures the time period, late August 1980 to be precise, exactly the way it intended. The film takes place during the final weekend of freedom before classes start as all the new freshman arrive at their Texas college and returning students move back to campus. We meet Jake (Blake Jenner) a freshman pitcher and his new teammates as they move in and begin to bond. The film follows the baseball team as they go to parties, attend practice and just hang out at their house.

Baseball has been a predominant theme in Richard Linklater’s movies. They discuss it in Before Midnight, go to a Houston Astros game in Boyhood and Linklater himself made a very pleasant remake of The Bad News Bears (2005). The fact that it takes place in Texas makes Everybody Wants Some fit in perfectly with the rest of Linklater’s mostly autobiographical oeuvre. 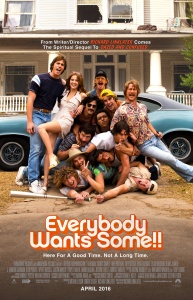 This movie’s strengths are within the nostalgic mood it creates, recalling a simpler time before AIDS, Wall Street greed, and terrorism. It makes the viewer look back fondly at their memories of that time period and if you are too young to be alive in 1980, it works just as well because the events that occur to our protagonist and his new friends/teammates will undoubtably make the viewer recall similar memories from their college years. The romantic relationships and friendships that are forged onscreen still happened to most of us sans the pervasive technology that infiltrates young adults lives now. I would love to see Richard Linklater revisit the same themes here next decade and wax nostalgic about the early 90s and a story about young people landing their first job or entering grad school.

The other biggest strength of Everybody Wants Some is its screenplay. Linklater managed to create a number of likeable and relatable characters in a short amount of time. Through natural conversational dialogue we feel as if we know these characters and do not mind spending any time with them at all. Even the few that have difficult traits like Tyler Hoechlin as a driven collegiate athlete who cannot stomach failure comes off as amiable when he could have been a one-dimensional sore loser, or Justin Street as an awkward but talented pitcher who lacks social skills, emerges as someone endearing when he could have been just annoying every time he was on screen. He provided the movie with some of its biggest laughs. Recognition should also go to Zoey Deutch, as the biggest female character still with limited screen time because as the romantic interest opposite Blake Jenner, she really made her few scenes very believable and compelling.

The clever dialogue with sexual innuendo makes Everybody Wants Some into a charming and heartfelt comedy. It has some solid laughs and a lot of decent chuckles. At the very least you will be smiling during many moments. Since the story is not plot driven the editing flows at a meandering pace which made Everybody Wants Some feel like a long moment of looking back. Richard Linklater has continued to deliver high quality films and Everybody Wants Some is a smart, humorous and relatable movie that ultimately is a lot of fun.