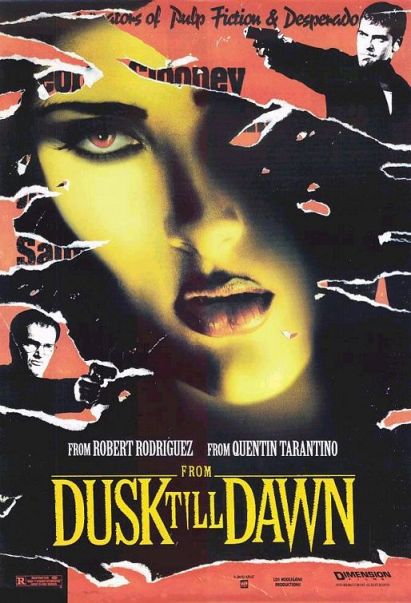 It is finally October, so you know what that means. Time for sitting back and curling up with your favorite pumpkin latte or Oktoberfest beer and watching horror movies. There is a plethora of horror films available to stream on Netflix, Hulu, Amazon Prime, HBO Go and every other service out there. To get things started I thought I would go with one of my favorites from two of the best filmmakers to emerge from the 1990’s, the unconventional vampire thriller From Dusk Till Dawn. Hard to believe that this movie is twenty years old. Written by Quentin Tarantino and directed by Robert Rodriguez, From Dusk Till Dawn feels like two separate movies with the same characters. The first hour plays like a standard crime thriller with two fugitive brothers (Clooney and Tarantino) taking a family hostage and heading down to Mexico. But once they get there the film flips a switch and turns into a gory, campy vampire western. With nice supporting turns by Fred Williamson, special effects guru Tom Savini, who did the gore for Dawn of the Dead (1978) and the original Friday the 13th (1980) plays a biker, Cheech Marin in three different roles, and it introduced the world to sexy Salma Hayek with an unforgettable and hypnotic dance with a snake.

From Dusk Till Dawn is a lot of fun and works well as an exciting horror movie and as a pulp crime thriller with Tarantino’s signature dialogue and Rodriguez’s grindhouse-style direction. This is very much an artifact from the time it was made. When Tarantino and Rodriguez were on the same level as filmmakers even though this was Tarantino’s first major movie since his Oscar winning Pulp Fiction. George Clooney was a TV star and this was his first major starring vehicle after his success on ER. Since then Clooney has become one of the biggest movie stars in the world and it is hard to imagine him starring in a low brow, violent horror movie. Tarantino has solidified himself as one of the best filmmakers of his generation while Rodriguez has floundered, Juliette Lewis who was a big star in the 90’s played the teenage daughter of Harvey Keitel and today she is in her forties and not exactly the A-lister she once was. Twenty years later From Dusk Till Dawn feels different than the fresh jolt of kinetic energy that it was in 1996 and serves more as a time capsule and footnote in the careers of everyone involved, but it still undeniably a very entertaining and unique thrill ride.

From Dusk Till Dawn is currently available to stream on Netflix.