Skip to content
Chicago on Film: The Best Movies of the Windy City
Editorials

Chicago on Film: The Best Movies of the Windy City 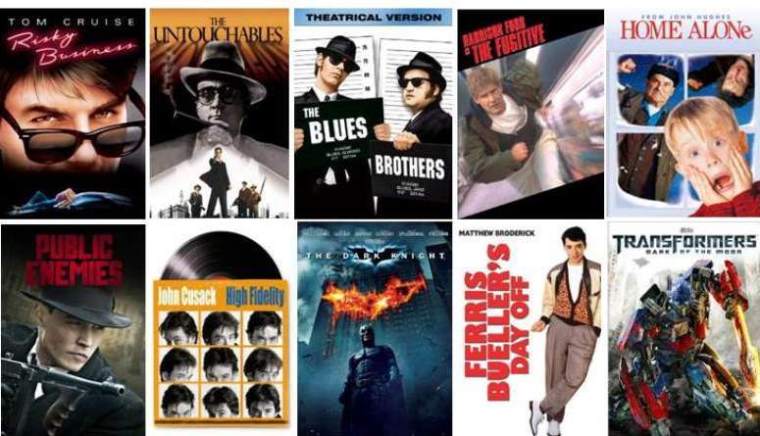 The Chicago Cubs are on the verge of making history since they are one win away from going to their first World Series in over 70 years and are heavy favorites to win it all, ending a 108 year old championship drought, the longest of any professional sports franchise.

The Cubs and their chances of winning a World Series have usually been treated as a farce in pop culture. The most famous example of course is Back to the Future Part II (1989) where Marty McFly jumps forward to the year 2015 and reads that the Chicago Cubs are World Series Champions over Miami. This was even more of an outlandish fantasy because at the time it was made, Miami did not have a Major League team. There have been other moments in The Simpsons where the Cubs are a punchline before they are a baseball team. Even the sci-fi flop A Sound of Thunder (2005) starring Edward Burns and Ben Kingsley treats the Cubs winning a Championship as much of a joke as time traveling back to the dinosaurs with World Series pennants hanging on the wall of Burns’ apartment. 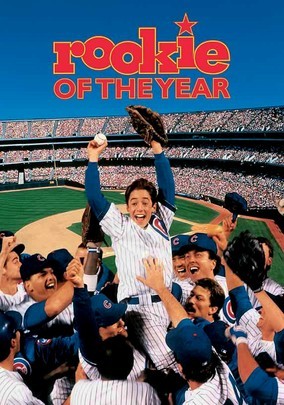 I know, I know, this is not necessarily a great movie. In fact it treats the Cubs World Series chances as much of a fantasy as anything by having the franchise rely on a 12 year old boy who had a freak accident that miraculously turned him into a pitching phenom. However, this was the film that I immediately thought of when thinking about the Cubs in the World Series and inspired me to write this column so it pretty much earned a spot in the top 10 based on that. Rookie of the Year is a product of its time, when kids sports movies were a dime a dozen during the 90’s and there is really no difference between this film and any of the others from its ilk such as The Mighty Ducks, Little Big League or Little Giants. But like those cliche ridden films Rookie of the Year is endearing, has a lot of charm and innocence and is a harmless fun movie for everyone who dreams of playing in the big leagues, which for most is even more of a fantasy than the Cubs winning a championship.

Sam Mendes’ follow up to his Academy Award Winning  American Beauty (1999) is every bit as great as his debut film, yet somehow has becoming a forgotten film and a footnote in the great careers of Tom Hanks and Paul Newman rather than a well renowned modern classic. That is a shame because Road to Perdition is a fantastic movie. Hanks gives one of the best and most underrated performances and Newman was so good I thought he deserved the Best Supporting Actor Oscar. Jude Law and Daniel Craig also have great small roles. It captures the city of Chicago beautifully in the 1930’s with gorgeous cinematography from the late Conrad L. Hall, who won an Oscar posthumously for his work on this film. Road to Perdition is a great story of the loyalty between fathers and sons and when the sins of the father are carried over to their children. A beautiful, and smart film in every way. 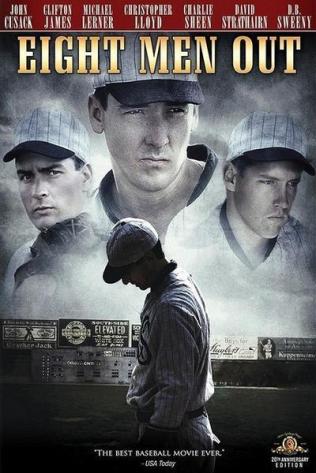 The second and, I promise, final baseball movie on this list. Independent filmmaker John Sayles outstanding Eight Men Out works as a great sports movie, history lesson and human drama. It takes us inside the dugout and front offices of the national pastimes first major scandal that shocked the country. It recounts and dramatizes the Black Sox scandal when underpaid players on the Chicago White Sox accepted bribes to throw the 1919 World Series. The effects of this scandal are still felt today as Major League Baseball still has a strong stance against gambling and anyone wondering why Pete Rose is not in the Hall of Fame need only see this movie to understand the devastation this brought to the game. Eight Men Out also captures Chicago in a very special time period and the detail in the sets, costumes and photography are all first rate. The ensemble cast is great all around especially the performances from John Cusack, David Strathairn and Clifton James as owner Charles Comiskey. 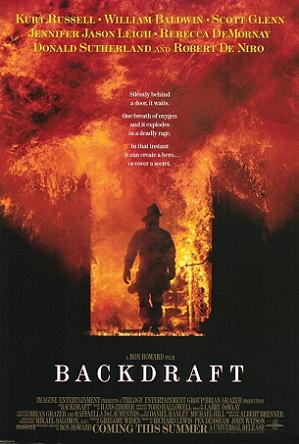 There have been so many great movies about the heroics of police officers and our military, but a lot less about the courageous acts of firefighters. Backdraft is the best film in my humble opinion to capture the everyday heroics of firefighters in a big city. That big city happens to be Chicago, making Backdraft one of the best movies to be filmed in The Windy City. Capturing Chicago’s wealthy north end as well as its working class South Side, it depicts every part of the city as we follow two firefighter brothers (Kurt Russell and William Baldwin) with a tumultuous relationship that have to get along. The plot is rather workman-like about a dangerous arsonist on the loose that leads all the way to city hall. But the way it depicts Chicago and the action scenes and stunt work involving real fire is something to behold. Check it out in the breathtaking clip below. 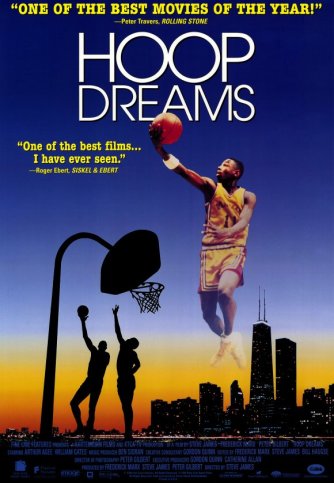 Roger Ebert called this the best movie of the 1990’s and his blue collar roots in Chicago may have influenced his opinion, but there is is no denying that Hoop Dreams is a very special documentary and is easy to understand why some may find it unforgettable. Hoop Dreams follows the lives of two inner-city Chicago boys over the course of four years as they struggle to make it to play college basketball and eventually try to go all the way to the NBA. It may be the best film to depict everyday life in the working class neighborhoods of Chicago, capturing life on the streets as well as their public school systems. It is long and does not move briskly but there is no denying Hoop Dreams is an important non-fiction film and true story about urban youth with very few options as they strive for the American dream. 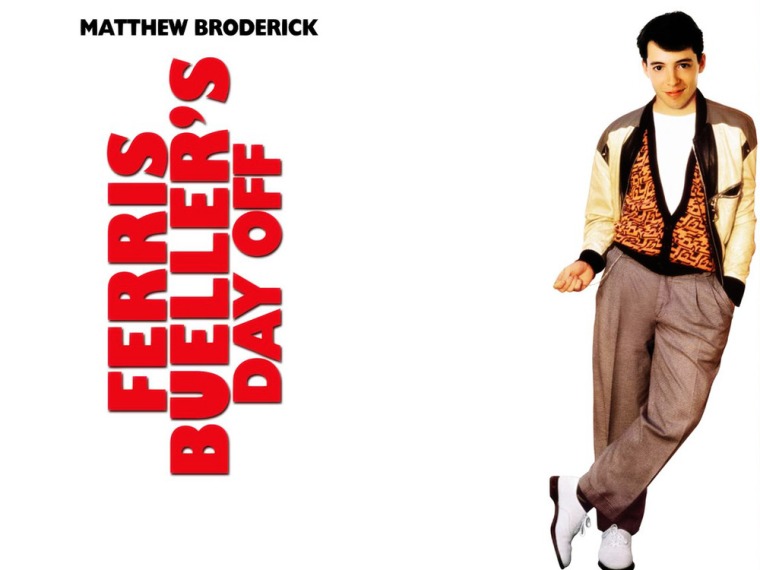 I had to include a John Hughes film on here. All of the films that he wrote, produced and/or directed take place in Chicago or the suburban areas that surround it. While Ferris Bueller’s Day Off is not as technically well made or as emotionally engaging as Sixteen Candles (1984), The Breakfast Club (1985) or Planes, Trains and Automobiles (1987), it is the best John Hughes film to depict the city that he loves as our title character played by Matthew Broderick convinces his best friend (Alan Ruck) and his girlfriend (Mia Sara) to explore the city on a beautiful day. We see so many wonderful Chicago landmarks as they skip school and have the time of their lives simultaneously evading his parents and an obsessed principal (Jeffery Jones). This is also arguably John Hughes’ funniest and most quotable film so that counts for a lot. Below is the famous parade showcasing the best of Chicago.

The only film on this list that shows off more Chicago landmarks than Ferris Bueller’s Day Off is this comedy classic which I consider the greatest movie musical of all time. It is a non-stop hilarious romp with fully developed characters and some of the best and funniest car chases and music numbers of any film. The Blues Brothers is like a big, loud, bombastic love letter to Chi-Town. I really wish that I could have had a first place tie with the top four movies on this list. Other than Animal House (1978) and Ghostbusters (1984) this is the best film of John Belushi and Dan Aykroyd’s careers respectively, and how appropriate that is. Their best film to take place in the Second City is the second best film they starred in. Below is a clip of The Blues Brothers and their Band performing ‘Sweet Home Chicago’ from the movie.

The second crime film to make it on the list and the only one to feature Chicago’s most notorious gangster Al Capone played by Robert De Niro (who also had a great supporting role in Backdraft as an arson investigator). Kevin Costner is great as Elliot Ness and so is Andy Garcia in one of his earliest big movie roles, but the real star of The Untouchables is Sean Connery as a Chicago beat cop who teaches Elliot Ness the “Chicago Way” to catch Capone by bending the rules and using his knowledge of the city to bring down it’s biggest crime boss. Connery would win a much deserved Best Supporting Actor Academy Award for his scene stealing role. The Untouchables is also one of the best films of prolific director Brian De Palma’s career. He captures Chicago beautifully during the Prohibition era with outstanding cinematography, sets, costumes and an unforgettable score from the legendary Ennio Morricone, The Untouchables is in some ways the ultimate Chicago movie. 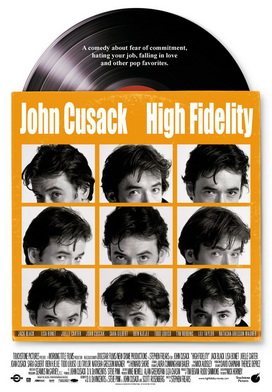 Moving Nick Hornby’s novel from downtown London to the back streets of Chicago was an interesting one, but it worked out and made High Fidelity one of the best romantic comedies of its era and the best one to take place in Chicago. What Annie Hall did for dating in New York, High Fidelity did for Chicago in the late 90’s and early 2000’s. A quintessential romance from the male perspective and a subtle ode to all the great musicians as well as actors and comedians to come out of Chicago. Featuring a great soundtrack and award worthy performances from John Cusack (his second film on this list), Jack Black and Tim Robbins in one of the funniest cameos of all time. This movie would be a tough sell to make today since people no longer meet in person at retail stores, but mostly do their dating and shopping online. Championship Vinyl, the record store in High Fidelity, is a loving representation of the original social network. Below is the Tim Robbins scene I mentioned… enjoy.

One of the best action movies of all time and one of the best movies of the 1990’s and the best movie to take place in Chicago is The Fugitive. It captured so many details of The Windy City better than almost any other film. Remarkably enough it is based on a true story that was turned into a TV show decades before the movie. In my recent interview with film critic and author Stephen Whitty, he called it the best modern ‘wrong man’ Hitchcockian thriller and I agree with him. It is in the same vein as North by Northwest. The Fugitive is a riveting, non-stop action packed ride that is entirely plot driven yet never skimps on the character development even though the thrilling script moves at a rapid, kinetic pace. The whole movie is basically a chase. A masterwork of action filmmaking and editing, it also features one of Harrison Ford’s best performances and Tommy Lee Jones was so great he won a well deserved Academy Award for Best Supporting Actor. The director Andrew Davis is from Chicago and he packed the film with local Chicago based actors. Look closely and you will see Jane Lynch, a Second City alum in a serious role before she achieved fame as a comic actress. The Fugitive is filled with great Chicago landmarks which felt genuine and natural during the chase. It showcases the city without feeling contrived or forced. The Fugitive is Chicago, just at a break neck speed. Below is Siskel and Ebert reviewing The Fugitive on their show back in 1993. It shows great clips from the film as they praise the acting and direction.