Boogie Nights by J. Koenigsberg Continuing with this months theme of celebrating great films the Oscars honored, or should have honored more, there is no better choice than Paul Thomas Anderson’s […] 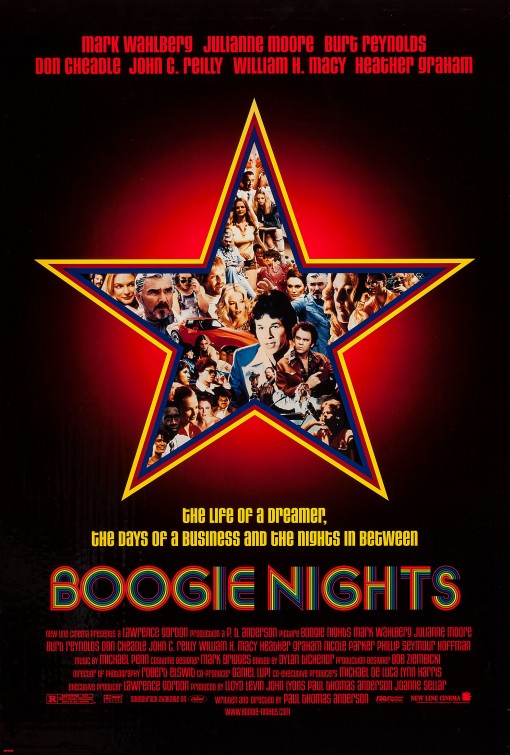 Continuing with this months theme of celebrating great films the Oscars honored, or should have honored more, there is no better choice than Paul Thomas Anderson’s Boogie Nights. Hard to believe this movie is twenty years old, with its outstanding soundtrack, ambitious narrative, perfectly cast ensemble of extremely talented actors giving remarkable performances, Boogie Nights has evolved from being a well made Scorsese/Altman wannabe hybrid, into one of the best films of the 1990’s. It furthered the careers of its entire cast helping  Philip Seymour Hoffman, Don Cheadle, William H. Macy, Heather Graham and John C. Reilly into bigger roles, but the real find was Mark Wahlberg as the lead. Boogie Nights launched his acting career from pop star Marky Mark into a legitimate actor and twenty years later he is now one of Hollywood’s most reliable leading men. It’s writer/director Paul Thomas Anderson would go on to direct other great films such as Magnolia (1999), Punch Drunk Love (2002) and There Will Be Blood (2007) yet many critics and film lovers still consider Boogie Nights to be his crowning achievement. It was nominated for three Oscars, Best Supporting Actor Burt Reynolds, Best Supporting Actress Julianne Moore and Best Original Screenplay and would lose all three. It was an afterthought in that years Academy Awards as many other great films were to the Titanic juggernaut. Two decades later Boogie Nights remains as prescient and compelling as it was when it first premiered.