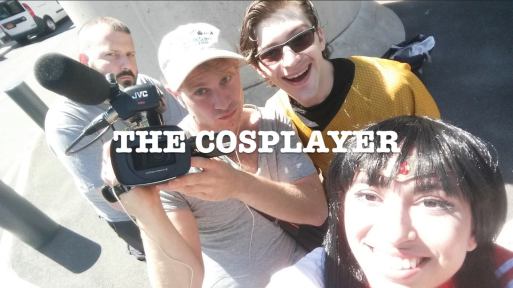 Long Island’s own Joe Ammendolea has returned with his sophomore feature film The Cosplayer after his decent directorial debut Dumped (2015). Well unfortunately the sophomore slump is strong with this one.

The Cosplayer is about a director trying to film a first date with two sci-fi nerds at a Star Trek convention in New York City and submit it as a pilot for a television producer. Technically, this movie is a mess. It starts off all over the place and the first twenty minutes when the exposition is given are very jarring. The location shooting in Manhattan and at the Javits Center for the 50th Anniversary Star Trek Convention add authenticity and are more interesting to look at that the normal low budget indie film, or for that matter, the big budget film that substitutes Vancouver for New York. Even though you can tell they are in the Big Apple it magnifies the movies technical limitations.

It is directed as a mockumentary, the same style popularized by TV shows such as The Office and Modern Family. Ammendolea has a long way to go before he reaches the same level as of those comic satires. The Cosplayer is plagued with amateur audio problems with scenes outside or in large rooms with practically inaudible dialogue and some of the camerawork is shaky to say the least. That may add to the charm of the homemade movie quality that Mr. Ammendolea was going for, but too often it was distracting making you wish that he invested in a steadicam.

The biggest strength of The Cosplayer is the chemistry between the two leads Jason Wieder and Sabrina Alamo. They are both have a great screen presence and deliver their lines impeccably. Whether or not these actors have done anything else, they certainly were convincing in their roles as awkward, slightly self-absorbed geeks. The climactic scene at the Trek convention is so fiendishly diabolical in an Orson Welles War of the Words sense, it almost makes The Cosplayer worth recommending. It ends strong, but that does not make up for making its audience sit through such a lackluster exposition.

The costumes are also well done. For this film they had to be since so much of the plot and dialogue centered on the characters wardrobe especially Sabrina Alamo’s Sailor Mars costume which was key to much bewilderment from other characters since that costume is an anime and unrelated to Star Trek and the majority of the film takes place at the 50th Anniversary Star Trek convention in Manhattan. They are surrounded by Trekkies and the director and actors make the most of it with their interactions with couples that love their sci-fi and the excuse to dress up.

In the end, The Cosplayer is a love letter to all the movie geeks and sci-fi nerds out there. Once you can get past the nearly unwatchable first act that seems like an inside joke only to the cast and crew, the rest of it is rather engaging. It is a flimsy effort at telling a love story between two geeks, but the interviews staged by the director at the Trek convention emphasize the importance of finding love and being with someone who loves the same passions no matter how dorky society might think they are.