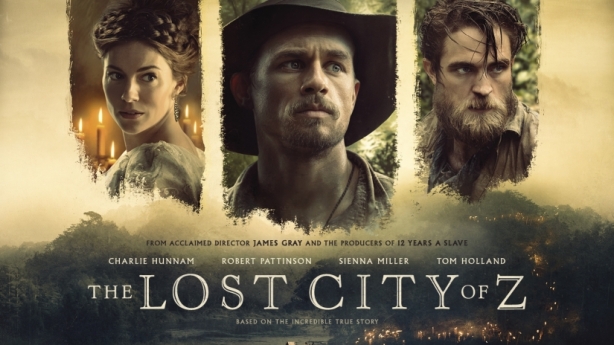 Writers: James Gray (written for the screen by), David Grann (based on the book by)

There is an invisible man walking around Hollywood. He has been there for over twenty years. He makes movies, they are critically acclaimed, yet make no money. Despite being critically acclaimed his movies have received zero Oscar nominations, or any nominations from major awards ceremonies other than the consolation prize of being one of many films nominated for the coveted Palme d’Or at Cannes. This invisible man is writer/director James Gray. His newest film The Lost City of Z has garnered as much praise as his previous films We Own the Night (2007), Two Lovers (2008) and The Immigrant (2013), ever see any of those? I did not think so. But they all have high scores on Metacritic and Rotten Tomatoes. This time I really hope audiences and maybe even awards ceremonies take notice and remember James Gray because The Lost City of Z is one of his finer efforts.

It opens up with the sounds of the jungle and then we see a flame burning, surrounded by indigenous tribesmen in an image that sort of looks like a funeral pyre crossed with an Olympic torch. It then cuts to the main character Percy Fawcett (Charlie Hunnam) in an elaborate hunting scene in Ireland. This hunt reflects man’s desire to control and dominate nature as they ride on horses and chase a giant buck. One of the main highlights of The Lost City of Z is it’s beautiful photography of nature. In the opening act in Ireland, all the scenes in England and the Amazon and it’s brief World War I battle sequences all feature terrific cinematography. The low key lighting throughout made the film look as if the director only used natural light for a more authentic atmosphere.

The Lost City of Z relies heavily on influence from filmmakers Terrence Malick’s The Thin Red Line (1998) and even more so of Werner Herzog’s Aguirre, The Wrath of God (1977). Although it never reaches the peaks of existential greatness those films do, The Lost City of Z still manages to pull you into its world and you want to follow along on the journey.

It also in a smart, subtle manner touches human natures desire to segregate based on ancestry and color. A common theme of all civilized societies around the globe nicely contrasted against the perils of an unknown wilderness. Civilized society versus primal nature is an important theme in The Lost City of Z and thankfully it never instructs its viewer on how they should feel. It takes place between 1905 and the 1920’s during the final days of the age of exploration of the Earths surface. Our hero Percy Fawcett is used as a pawn by the British government and sent around the world as a mercenary to fight, explore and tame wild lands on the farthest reaches of the British Empire with no consideration for his families needs. At first we feel sorry for him as he sent to trek through the jungles of uncharted Bolivia and the Amazon rainforests. But over time he fell in love with the jungle and the fame it brought and going back to explore the Amazon became an addiction to him and tore him from his family. His insatiable quest for exploration, to conquer nature, and climb the social ladder from the fame he received was like a drug. The jungle scenery is so beautiful it is easy to understand why he may want to leave his gorgeous wife (Sienna Miller) and three children every time he returned to England.

Once again the nature photography was very good, but not on par with the finest works of Malick or Herzog. The other weakest aspect of The Lost City of Z was the acting. The performances were only subpar. Charlie Hunnam is good, but lacks the charisma and screen presence his larger than life character needed to exude. Sienna Miller was in a thankless and underwritten role as his long suffering wife. Maybe the script was poor or maybe she did not have enough compelling talent to make the role more than just a throwaway part that we have seen thousands of times. The only two actors that stood out were Robert Pattinson and Angus Macfayden as two fellow explorers with interesting looks and moments that demanded your attention.

Avoiding comparisons to other similar movies, The Lost City of Z is very good on its own. It looks great the entire time. The social commentary about the mistreatment of indigenous people used as slaves is something sadly still relevant. The costumes look authentic and it was an especially nice touch the way they used white in the costumes to symbolize greed and evil as part of the films analysis of the white man’s burden. The exotic jungle locales emphasize nature and its symbiotic cruel relationship with mankind. The final shot was noteworthy about our civilization trying to impose and overtake the jungle as people get lost in it, but was too obvious, especially after so many more subtle shots conveyed that throughout the rest of the film.

Overall, The Lost City of Z is an expedition into the jungle worth taking. It is a few steps away from greatness, but an interesting and entertaining journey with as much say about our society now as it does a story about exploration one hundred years ago.