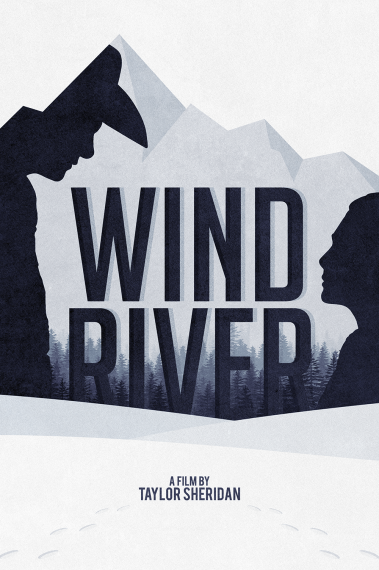 A murder mystery/modern western from the man that gave us last years outstanding Hell or High Water, Taylor Sheridan’s Wind River plays like the Winter Olympics version of his breakout film as a writer/director. Stylistically it is every bit as well crafted as Hell or High Water, just minus some of the humor and the social commentary is not as grand and ambitious this time around. Instead it is more focused on a regional demographic and not the whole country.

Shifting the action from Texas to the cold Wyoming mountains, the gorgeous cinematography prominently features white snow and is especially dynamic when that solid white is splattered with red blood on the snow. The white snow seems to be photographed to symbolize evil, as if it is hiding something sinister buried underneath it. Rarely is white used as a color for malevolence on screen and it works perfectly in Wind River.

The opening shot is of a woman running in the snow at night with pretty mountains in the background over the sound of a woman’s voice reading a poem. It immediately let’s the audience know that this is inspired by a true story. The second scene is actually one of the best in the entire movie, the way the director introduces Jeremy Renner’s character. He is in white camouflage and shoots at wolves that are threatening a flock of sheep. After Renner shoots them, the sheep flock around him, he is promptly established as a skilled hunter and a protector of the weak.

While walking on the Wind River Indian Reservation he comes across a dead body of a young Native American woman. Elizabeth Olsen then shows up as the fish-out-water FBI agent sent to investigate the situation. Her role could have been very stereotypical but because of the shrewd script Ms. Olsen delivers her best performance in years.

Wind River also features some terrific parallel editing when characters knock on a door and someone answers and we realize that the film has shifted to another scene. It also uses sound to effectively carry the narrative with clever sound editing with use from a chainsaw and a snowmobile.

The greatest strength of Wind River are its deep character portrayals. Especially Jeremy Renner as a hard working single father dealing with loss. The way the story unfolds information is slowly revealed to the audience and Wind River depicts a portrait of loss and grief that few movies do. It is also a smart social commentary on the modern Native American plight in White American. They live isolated from most government services that can help them and few can reach the cold reservation in a timely manner. In Hell and High Water Taylor Sheridan tackled the economic hardships and big business hurting the dwindling middle class in the guise of a modern western. In Wind River he paints a sympathetic picture for an ethnic group forgotten and lost in their homeland and ignored by the government that displaced them generations ago.