Movie Review: All the Money in the World 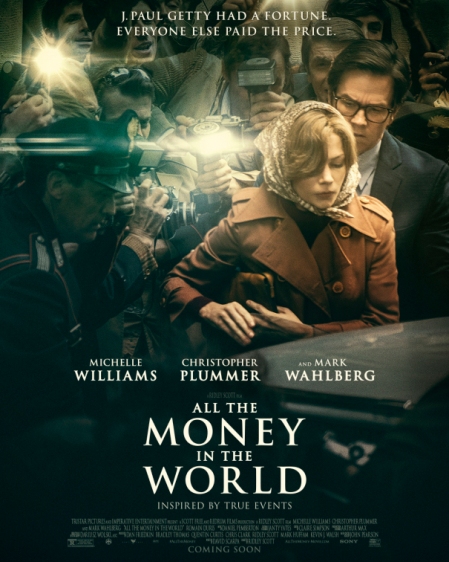 Ridley Scott’s newest big budget production All the Money in the World is more famous for its last minute reshoots completed about a month ago when disgraced actor Kevin Spacey was replaced completely by Christopher Plummer who took a mere ten days to reshoot all of Spacey’s scenes as oil tycoon J. Paul Getty. This probably turned out to be the greatest Christmas gift director Ridley Scott could have asked for since not only was Christopher Plummer Scott’s original choice for the role, allegedly the studio wanted a bigger name actor to star, but Mr. Plummer is also the best aspect of All the Money in the World.

The movie opens up with black and white footage of Rome that slowly transitions to color over the opening credits. Here the audience meets Paul Getty, grandson of the wealthy J. Paul Getty. After a few minutes we see the teenage Getty kidnapped as he is thrown into a van and this sets of the course of the rest of the film where the kidnappers demand millions in ransom and the miserly senior Getty refuses to pay to get his grandson back to safety. It flashes back to scenes with the grandson as a preteen and informs the audience what it was like for everyone involved growing up Getty. He had little use for his family and only cared about his bank account.

Early on the film establishes J. Paul Getty as aloof and removed from his family and only caring about his wealth. Later scenes make him out to be even more of a selfish monster who is only willing to give the amount of ransom that the government will allow him to use as a tax write off. All the Money in the World is a sly indictment of Trump and all of the richest people in the world and the unscrupulously frugal things they probably do to maintain their wealth and avoid paying taxes. I . There is a great speech Christopher Plummer gives about why he values tangible things and materialistic items over the love of people. It is sad and revealing about his character and one of the best moments in the film. t is a commentary on all the out of touch upper class and will no doubt make movie buffs think of Citizen Kane (1941) and how his character tried to overcompensate with material goods to make up for the lost love and happiness in his life.

All the Money in the World contains some resplendent location shots of Italy. While making it’s natives look like low life hoods since they are kidnappers, it does capture their country’s gorgeous and historical atmosphere. The cinematography looks sharp as it always does for a Ridley Scott film. His visual style is immaculate and few directors can equal his dynamic images he projects on the big screen.

All the Money in the World is just not as compelling or suspenseful as it could have been. Some of this could be the acting. The usually reliable Mark Wahlberg seems to be just going through the motions, but perhaps he was supposed to since his character’s motivation is just a man doing his job getting paid by a rich guy. Michelle Williams fresh off her Oscar nominated role last year for last years Manchester by the Sea makes the most of her role and does her best to convey the emotions a mother would have if her child is taken and she has to cooperate with a family that is run like a corporation to negotiate her son’s safe return. At age 37, Ms. Williams is perhaps too young to convincingly play a mother of a teenager. She is undeniably talented but this role would have been better suited for an actress with more life experience under her belt. Charlie Plummer as the kidnap victim Paul Getty is adequate at best. Some of his scenes work because of the cruelty his character is put through, others are just prosaic when they should have felt heart pounding. It also does not help that his character has some very weak voice over narration meant to catch the audience up to speed. Lazy screenwriting with an uninteresting voice does make matters worse.

Christopher Plummer is without a doubt the highlight of All the Money in the World. It is hard to imagine Kevin Spacey covered in latex doing justice to this role. J. Paul Getty was meant to be played by an actor in his 80’s such as Plummer, or someone in his age range like Max Von Sydow or Robert Duvall. Christopher Plummer commands the screen every time he is in front of the camera. There are small moments where the viewer may notice a scene was a quick reshoot, sometimes Plummer is shot by himself when it might have been easier to shoot him with the other actors, but none of those moments take away from his performance. He is already the oldest actor to win a competitive Oscar when at age 82 he won Best Supporting Actor for Beginners (2011), he is so outstanding in All the Money in the World it would be great to see him at age 88 become the oldest actor nominated for a competitive Academy Award.