‘Hostiles’ Adds Nothing New to the Western 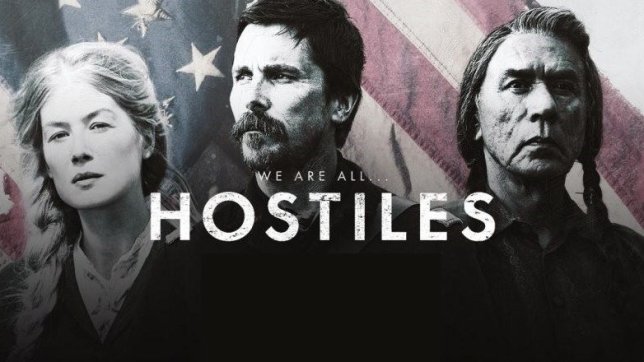 Hostiles opens up with a quote by D.H. Lawrence explaining that The United States has an isolated, stoic and harsh soul. The images that follow on screen for the next two and a quarter hours will support his quote for the most part. After the quote we are given an establishing shot of an isolated cabin in the wilderness. The family that dwells in that cabin are about to have a deadly encounter with Native Americans that sort of sets the course for the action that follows, yet for some characters and storylines in Hostiles it will hardly have any relevance.

Early on this film depicts scenes of white Americans and Native Americans as cruel and heartless to each other. The violence in some of the first scenes comes across as extremely brutal, yet in later scenes the director chose to leave the violence off screen as if to say we know what happens, we do not need to see the brutality again. These were interesting choices by writer/director Scott Cooper who does an admirable job showing that everyone gets their hands dirty in the Wild West. Hostiles tries to examine the moral implications of justice, vengeance, and murder in ways that other westerns have. Unfortunately this movie does not really add anything to the genre nor does it have anything new and profound to say about its themes.

The look of Hostiles is almost too crisp and modern. Cooper does give us some gorgeous establishing shots showing off the beautiful natural scenic views of Montana and Wyoming. The digital colors on screen were actually too bright and clear, making this movie look like a product of the 21st century. Hostiles would have benefited from a grainier and harsher look that could have easily been done in post production. This movie would have been an ideal candidate to be shot on 70mm film.

Aside from the look of the film, the sound quality left a lot to be desired. The dialogue in a lot of scenes was very low and featured a lot of the characters mumbling their lines, so much that one might wish they could either turn up the volume or just put on subtitles during many of the scenes where characters converse with each other. It was mostly an issue with the males, as if they were all trying to do Marlon Brando impersonations. Rosamund Pike, the only significant female role spoke and cried loud and clear and is probably the best performance in Hostiles. It is still astonishing that three years after her dynamic turn in Gone Girl (2014) superstardom has eluded her.

Hostiles ends up feeling empty by the end. The final shot was noteworthy about technology and love bringing people together and putting an end to the harsh and soulless lifestyle of the old west, but in between the violent beginning and the optimistic final shot, there is not much that Hostiles has to say that we have not already seen from better westerns. It takes heavily from The Searchers (1956), Unforgiven (1992), The Proposition (2006), and unlike last years modern western Hell or High Water, it does not tell the audience anything that they have not seen from previous exercises in the genre. This is the fourth film directed by Scott Cooper. He guided Jeff Bridges to his long overdue Oscar win with his debut film Crazy Heart (2009), he directed one of this decades most underrated melodramas with Out of the Furnace (2013) which also starred Christian Bale. Black Mass (2015) underwhelmed and underperformed mostly because it just was not very good as the movie version of the real crime boss Whitey Bulger and as the chance for Johnny Depp to return to legitimacy with hopes of an award season run that never happened. Now Hostiles is closer to Black Mass than his first two more emotionally engaging pictures. Hostiles is treading on mediocrity with the potential for greatness.

Instead of seeing Hostiles check out the 2007 remake of 3:10 to Yuma directed by James Mangold. They both star Christian Bale and Ben Foster and this is one of the rare examples of the remake surpassing the classic. In fact James Mangold’s most recent film Logan felt more like a western than it did a Marvel movie and was one of the best films of 2017. Maybe he should have directed Hostiles.