Skip to content
‘The 15:17 to Paris’ is one of Clint Eastwood’s Strangest and Worst Movies
Movie Reviews

‘The 15:17 to Paris’ is one of Clint Eastwood’s Strangest and Worst Movies

Movie Review: The 15:17 to Paris PG-13 | 1h 34min Director: Clint Eastwood Stars: Alek Skarlatos, Anthony Sadler, Spencer Stone by Jason Koenigsberg In one of the strangest moves of an illustrious and […] 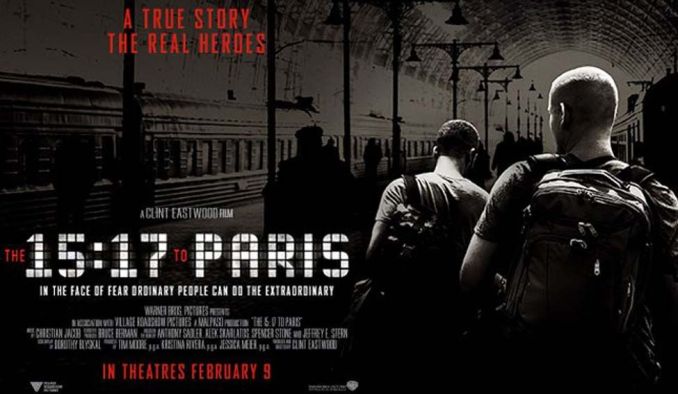 In one of the strangest moves of an illustrious and legendary career, filmmaker Clint Eastwood decided to center his latest film on courage and heroics of everyday people by placing the foundation of the picture on experimental stunt casting by having the actual real life heroes portray the events they lived through rather than actors re-enact the event. Why he decided to do this I have no idea, but it does not work. His most recent film Sully (2016) was based on the heroics of an everyday pilot for a commercial airline that saved all of the passengers and crew members by landing the plan in the Hudson River. Sully, the unlikely hero was played by Tom Hanks, and although I was not fond of the picture, it was immensely superior to The 15:17 to Paris.

We open up with a shot of a man’s backpack walking through a train station. There are lots of close ups on his feet, arms, legs, and back yet no clear shot of his face. Obviously we can assume that this man is the terrorist that will be pivotal to the films main conflict. Then there is a quick flashback with lazy narration introducing our characters as they cruise around in a convertible. But that lasts only about minute before the film pointlessly cuts even further back to their elementary school days.

From there The 15:17 to Paris is nothing more than mundane scenes establishing their friendship and struggles they have to make physical and intellectual goals that society, either the education system or the US military, have said they must pass in order to be successful. The problem is that the script sounds like it was written by a fifth grader. The costumes were glaringly obvious to make certain characters stand out as “good guys”, “bad guys”, and in the case of our three heroes, stand out as a discernible team. Maybe these undeniably noticeable shortcomings could have been masked if they at least had professional actors playing the parts but the insistence on the actual heroes from the event playing themselves makes everything bad about The 15:17 to Paris stand out even more. Non-actors playing themselves is a bold choice and it has worked out in the past, but early on Clint should have realized that this experiment was not going to work and there are plenty of talented unknown actors that could have played these three parts much more believably.

Why Eastwood decided to make the film 80 minutes of banal dialogue intercut with a few glimpses of the terrorist attack on the train are beyond comprehension. However, once the final terrorist hijacking scene takes place in the film’s climax, it does not disappoint and is quite riveting. He applied the overused handheld and shaky camera shots during this scene but they worked effortlessly to convey suspense. The most compelling moments come at the films last fifteen minutes so it boggles ones mind what Clint was thinking when he chose to have audiences sit through a film that is subpar most made-for-TV after school specials to get to anything worth watching. Also interesting was his choice for pop culture references. The three most prominent being posters in the boys room of Stanley Kubrick’s Full Metal Jacket (1987), Eastwood’s own superior directorial effort Letters From Iwo Jima (2006) and one character even wears a t-shirt that bears Eastwood’s image from his terrific western Pale Rider (1985). The military theme being something these boys are interested in makes sense, just not sure why he felt the need to call back to his earlier vastly superior films. It is bizarre but so is the entire movie itself. Anyone in the audience can tell these guys never acted before and it did not make The 15:17 to Paris feel more real than the average action thriller, it made it feel more phony.

Eastwood at this point of his career is very interested in telling patriotic stories of real life everyday Americans doing heroic deeds. His three most recent films American Sniper (2014), Sully (2016) and now this all trace back to people with humble roots that are living their normal lives thrust into action to protect and save lives. But I would take Bradley Cooper and Tom Hanks anyway over non-actors. At 87 years old Clint can direct whatever scripts he wants and with two best Director Oscars on his shelf he has proven to be one of the best filmmakers of all time. However, with every film he makes it could easily be his last and I hope that this is not the swan song for Clint Eastwood the director. He deserves a much better final chapter and we deserve a better farewell from the legendary film icon.

Skip The 15:17 to Paris. If you want to see a better movie based on real life heroes thrust into check out just about anything else Clint Eastwood has ever directed. Here is the trailer for Unforgiven (1992) my personal favorite film of his as a director and the first time he won a Best Director Academy Award.