click the play button to listen to the review 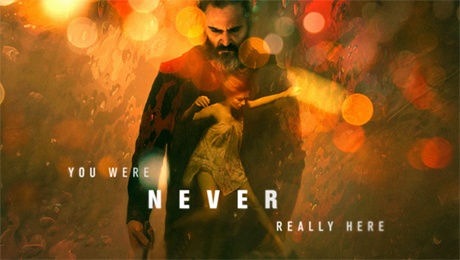 The first words that comes to mind to describe the new Joaquin Phoenix movie are Taxi Driver. It evokes ideas and themes from J.D. Salinger’s Catcher in the Rye, and blatantly takes images and plot points from Martin Scorsese’s 1976 masterpiece Taxi Driver and attempts to repackages them for the modern age. It is a savage film, with semi brutal moments but not nearly as brutal as director Lynne Ramsay’s previous feature We Need to Talk About Kevin (2011) that was so disturbing it went mostly ignored which is a shame considering it contains the bravest performance from Tilda Swinton, which is easily one of the best performances from any actor this decade. Joaquin Phoenix once again delivers a powerhouse performance and he is by far the best thing in You Were Never Really Here, that it makes not recommending this film more difficult than it should be.

The opening shot is of green dust particles and we hear a whispering voice counting down numbers. Then it cuts to Joaquin Phoenix’s face suffocating under a plastic bag. There are a lot of shots right after of a hotel room as it appears our main character is cleaning up after a crime scene. The close ups gradually turn into medium shots and we finally get a few real looks at our hero/anti-hero. His beard and head under a hood make him look like a mythical wanderer, or a biblical figure roaming the 21st century as an avenging prophet. After his face and full body are revealed Phoenix is always framed in the middle of the shot. By placing him dead center it elevates the fact that this man is always isolated and alone. Much like Taxi Driver, You Were Never Really Here is a portrait of loneliness. The plot is slowly revealed and we learn mostly through images and minimal dialogue that Phoenix plays Joe, a traumatized war veteran who also suffered abuse as a child and now works as a hired vigilante who tracks down missing girls used as sex slaves. One job Joe gets in over his head and uncovers a political conspiracy that could have grave consequences for him and the very few people in his life.

We learn that he lives and takes care of his elderly mother and early on they mention Psycho (1960) in a conversation. This may be a reference to his mother issues and sexual abuse that was hinted at with Norman Bates but it is more likely an homage to it’s composer Bernard Herrmann who also created the score for Taxi Driver. The always versatile and risk taking Joaquin Phoenix portrays a tortured war veteran believably, with scars all over his body (which may also have come from child abuse), and he illustrates living with deep depression and suicidal thoughts seem authentic.

The movie around Joaquin Phoenix was much less subtle and plausible. The directors use of colors was as flagrant as her rip offs of Taxi Driver. There is a lot of green meant to symbolize sickness, mainly his mental illness, and a lot of red meant to symbolize blood and murder. The use of these two colors is nothing new and could be forgiven if it were not so obvious and if the script did not make the characters talk about the colors. That was just way too heavy handed. The music score was also heavy handed, its punk noir soundtrack blasting out of the speakers in the theater was too coercive and oppressing our eardrums, but at least they only used music sparingly in the film.

The violence is also used sparingly. People may walk out of You Were Never Really Here and label it a violent film, but most of the violent acts happen offscreen and what we see are the blood and aftermath of the violence. There are moments of blood that serve as a shock and will jolt the audience upright in their seats, but other than one moment at the end, almost all of the violence is hinted it which makes it all more effective that the filmmaker forces us to imagine the carnage without even seeing it. Plus, the final shot is a winner that recalls the point of the title phrase and creates a whole double meaning to everything that we just saw.

This is a conflicted review because there is a lot to admire in You Were Never Really Here, however this movie would not exist without Scorsese’s Taxi Driver. The fact that it takes place in New York City drops it down a few pegs. There are a lot of shots of yellow taxi cabs driving around at night, but they lack the aesthetics of Taxi Driver which serves as a time capsule of New York City when Manhattan was a cesspool with hookers and pornography theaters on ever corner. You Were Never Really Here adds nothing new and does not have much to say other than updating similar themes and a practically identical story for the modern New York City, it is just a lot less interesting to look at. The New York depicted here could be almost any major city in the US, it has no character. They even have our hero going after a politician. If the story and themes were not a Xerox of Taxi Driver, or if this movie had something new and unique to say about mental illness, loneliness, politics, the sex trade, or anything then maybe it would warrant a recommendation.

Skip You Were Never Really Here and watch or rewatch Taxi Driver, one of the greatest movies of all time.