click the play button below to listen to the review 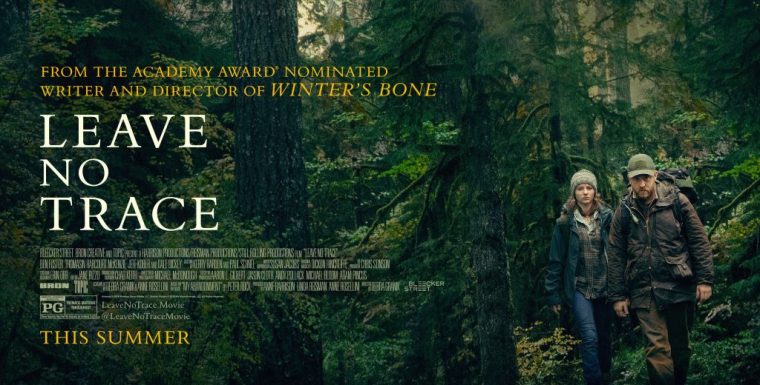 Finally, director Debra Granik’s long-awaited feature follow up to her much loved Winter’s Bone (2010) is here. Was it worth the worth the wait? Absolutely not. Both films are the stories of a poverty-stricken family living in the wilderness trying to survive but while her debut film played more like a murder mystery/thriller, Leave No Trace is just a plodding and meandering drama that often times feels more lost in the woods than the characters that inhabit them. Winter’s Bone earned Academy Award nominations for Best Picture, Screenplay, Supporting Actor for John Hawkes and Lead Actress Jennifer Lawrence making her an in-demand actress overnight on her way to superstardom. Leave No Trace tries to do the same thing with newcomer Thomasin McKenzie in her breakout role. She is good but the movie that surrounds her at times feels slower than a sloth. Time will tell how audiences and the awards circuit take to Leave No Trace but for right now it is not a film worth revisiting.

Leave No Trace opens up with a shot of the sun shining through some green tree branches. There is a heavy emphasis on the color green especially in the opening shots contrasting the lush beauty of nature versus the less colorfully vibrant society. It tells the story of a single father and widower living (or surviving) in the wilderness in a huge park just outside of Portland, Oregon. They live like frontiersmen just on the other side of the curtain from an urban civilization. The biggest weakness is the deliberately slow and methodical pacing as the characters are caught by the authorities and slowly trying to adjust to a society with four walls always enclosing them. The scenes with the father played by Ben Foster and his daughter being introduced to the church and organized religion were more boring than they should have been. Eventually, the daughters struggle to blend into society and finds herself getting comfortable with four walls to come home to instead of a nomadic life much to her father’s dismay. Both Ben Foster and Thomasin McKenzie are admirable in their roles but are given very little to do other than walk around with a sullen look on their faces.

There are some commendable moments in Leave No Trace such as the beehive scene which was very neat to see those bees interact with the actors in a strikingly beautiful moment. That scene worked because the director knew when to yell cut and it is short and to the point. There is also a nice father/daughter metaphor they touch upon with seahorses about how their love lasts for a lifetime. Plus the dimmer and dull lighting scheme for all the indoor scenes is a stark contrast to the wide-open nature cinematography with the sun shining brightly making all the natural colors feel more alive. But even those scenes hold no contest to the stupendous nature cinematography from directors like Terrence Malick, Werner Herzog, or John Boorman. Leave No Trace felt like a more colorful and slower version of the film adaptation of Cormac McCarthy’s The Road (2009) starring Viggo Mortensen. There are not enough reasons to recommend Leave No Trace but it is not the worst way to spend two hours, just maybe wait until summer is over and the beautiful warm weather is gone for the year.

Instead of seeing Leave No Trace, check out Debra Granik’s debut film Winter’s Bone, the film that earned Jennifer Lawrence her first of many Oscar nominations.