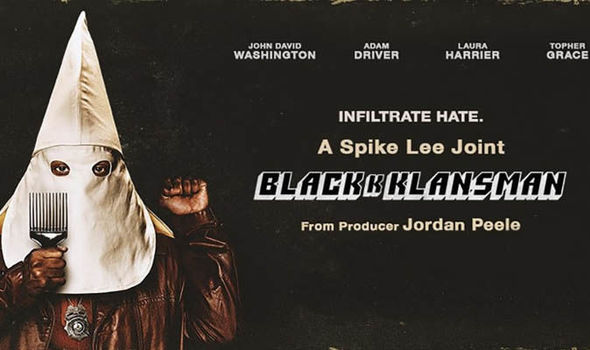 Wow. On the one year anniversary of the riots in Charlottesville, American audiences are given exactly what they need with Spike Lee’s newest film BlackkKlansman, a movie that taps into the American psyche in an obvious but vital manner. This is something ALL Americans should see, not just liberal-minded people, but everyone so they can reflect on where our country currently stands and what they can do to improve our current racial schism that divides us.

BlackkKlansman opens up with military-sounding drumbeats and the first images we see are from a famous moment in Gone With the Wind (1939) where a character walks out onto a field and the camera pulls back revealing all of the wounded bodies from a Civil War battle. It then eventually shows a tattered Confederate flag waving in the wind as if to signify that was the end of the Southern culture of the United States as they knew it. This will all come back to serve as a very strong point in both the film and in the current political climate our country is in as of 2018. We then see Alec Baldwin (who I am sure was chosen for this part because of his recent fame portraying President Donald Trump on Saturday Night Live) giving a hate speech about the inferiority of all races other than white Christian Americans. As he is speaking we see scenes of D.W. Griffith’s controversial masterwork The Birth of a Nation (2015). This film will come up later in BlackkKlansman but Spike Lee has set the stage of where he is going to take us on this journey. Also, it should be noted that even though Spike Lee is always associated with New York City, he was born and grew up in Georgia, so he most likely went on some class trips to Confederate landmarks and to screenings of Gone With the Wind during his childhood. That likely had an impact on his political views and his feelings about the Southern values and culture depicted in that film.

The journey the audience is reliving is that of Ron Stallworth (played by John David Washington), the first African-American police officer to join the Colorado Springs police force. While he was stationed there he managed to successfully infiltrate the Ku Klux Klan and became head of the local chapter. Once the story gets started with some establishing shots of the Rocky Mountains, the next two hours are all about Ron Stallworth and how he was the Jackie Robinson of the Colorado Springs PD and how his race put him in a very precarious situation to do something about racism and hate crimes that no other African-American in the state was in a position to do. He struggles with his own identity torn between his race and his professional duties as a police officer. Spike Lee inserts his own beliefs with moments that compares the fraternal order of police with the KKK. But our director is also self-aware and later juxtaposes a scene with the Klan watching and rallying at a screening of Birth of a Nation cross-cut with scenes of Harry Belafonte telling the African-American Student Union about a horrific story he witnessed as a child. They both end with the KKK members chanting “White Power!” with their hands raised and the African-Americans raising their fists to sky shouting “Black Power!”. It is a powerful moment and one of the best uses of parallel editing from any film this year.

John David Washington (Denzel’s son) does a solid job in the biggest role of his career thus far as the title character. Adam Driver deserves special kudos in a much more difficult part as a Jewish police officer posing as the white Ron Stallworth so that he can go to the KKK meetings. His scenes in BlackkKlansman are some of the most nerve-wracking in the entire film because his life is on the line as he gets deeper and deeper into this dark underworld of hate. We fear for his life not his partners as some of the less trusting members of the Klan will test him in hostile situations. Adam Driver also has lines where we learn about his faith and his background and make his character more relatable and realistic. Topher Grace does a great job in his most important role in years as David Duke, the Grand Wizard of the Ku Klux Klan, and probably the only real-life figure most people in the audience will know. Plus, Corey Hawkins has a great speech in his one scene that really gets the ball rolling in BlackkKlansman and announces to the audience and our main character what this movie is going to be tackling and how race really divides us then and now. He talks about “All the power to all the people”, but his black militant views seem to channel something else.

For the majority of BlackkKlansman as we follow Ron Stallworth on his unbelievable true story, the film is shot with soft lighting, especially during the interior scenes. This gave the movie an authentic 70’s feel since it took place during that era. A lot of the dialogue hinted at the post Civil Rights Era and the Vietnam war going on in the background. The screenplay for BlackkKlansman is one of the best aspects of it with subtle jabs at Trump. This movie is not as blatant with its message as one might expect it to be. Trump’s rhetoric and his most famous lines are sprinkled throughout the screenplay. When someone thinks of a Spike Lee movie, their first thought is not usually ‘subtly’. His films are usually very visual in-your-face lectures with loud music accompanying his message. He has tackled themes of racism in America many times before most notably in Do The Right Thing (1989) but BlackkKlansman is a calmer gentler Spike Lee joint and he lets the images and the script speak for themselves without berating the audience with overblown and bombastic techniques that he used in some of his previous films like 25th Hour (2002), She Hate Me (2004) and Chi-Raq (2015).

The absolute best aspect of BlackkKlansman is how much this film takes the United States during the Vietnam War and shows that we are practically in the same place and having the same domestic racial struggles fifty years later. What happened then is eerily similar to what is happening now. The dialogue and the images both convey this. Shots of Nixon propaganda reminding us of Donald Trump. Early 70’s culture and lines of dialogue that the characters said then sound very much as if people are saying the exact same things in 2018.

BlackkKlansman is also genuinely funny. It has some clever dialogue that is guaranteed to make the audience laugh while it touches on serious topics such as how racism is taught, how our history has been plagued with racial inequality since our nation’s inception and best of all how BlackkKlansman echoes most Americans sentiments and feelings about how we are racially divided today. Some elements of the narrative were sped up and compartmentalized for time. But this has Spike Lee’s signature all over it, especially with the end. No spoilers here but Spike deserves a lot of credit for letting the images and real-life footage speak for itself and then the red, white and blue flag, turns into black and white and the audience is left to contemplate where they stand and as President Kennedy famously stated ask, “What you can do for your country”. BlackkKlansman is a film ALL Americans should see, not just liberals, not just Trump haters, not just white people, or black people, but everyone so they can reflect on the state of their nation, and themselves.