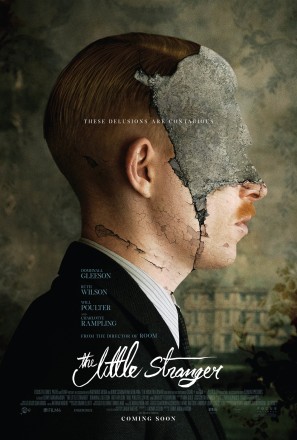 Lenny Abrahamson follows up his Oscar-nominated and acclaimed drama Room (2015) with an intriguing gothic murder mystery The Little Stranger, based on a beloved novel. It is the tale of a doctor who takes a house call to a wealthy estate in the English countryside after the second world war. Once he arrives strange things start to take place in the decaying manor and the residents begin to act bizarrely as seemingly supernatural events slowly unfold and childhood memories are brought to the surface. The result is a very atmospheric but never intense picture that is best described as a ghost story without any ghosts.

The Little Stranger opens up with a shot of our main character, the doctor played by Domhnall Gleeson, shaving his face. Then the telephone rings and we see the title. Symbolism is strong in this picture. Acorns are a dominant recurring motif that ties into the plot. As more information about our characters become revealed, acorns continue to tie in and reflect the seeds that grow in the darkest places of these characters hearts.

The actual plot is not as vital to the story as the characters develop and struggle to contain the past which wants to unleash itself throughout the mansion. The doctor character shares a story about when he was a child and fell in love with the estate and longed to become part of the house and the family that dwelled in it. This is due to his childhood memory and deep desire to better his social standing and live with the upper class. Of course, his unearthing of a childhood memory opens up the door for other characters, and the house, to unearth their own dark memories.

The costumes, sets, and automobiles all look authentic and are exquisitely detailed. The mansion where most of the action occurs in The Little Stranger is very bleak especially during the latter half of the film. It greatly contrasts the bright green colors we see early on. The forest that surrounds the haunted estate has such a vibrant green that it really pops and stands out among all the other colors in the film. This subliminal method works and makes the darker scenes stand out even more during the film.

The Little Stranger is one of the most subtle horror films one will likely ever see, that classifying it as such almost does a disservice to the genre and gives unfair expectations to the film. It is a psychological slow burn of a movie that works on deep levels that deal with scars people receive from war, and internal scars they receive from their families and their past. The final shot is a real winner that strikes a somber, not suspenseful note, which fits thematically with what The Little Stranger set out to be.