Hats Off to Gaspar Noe’s Uncompromising​ and Unsettling ‘Climax’ 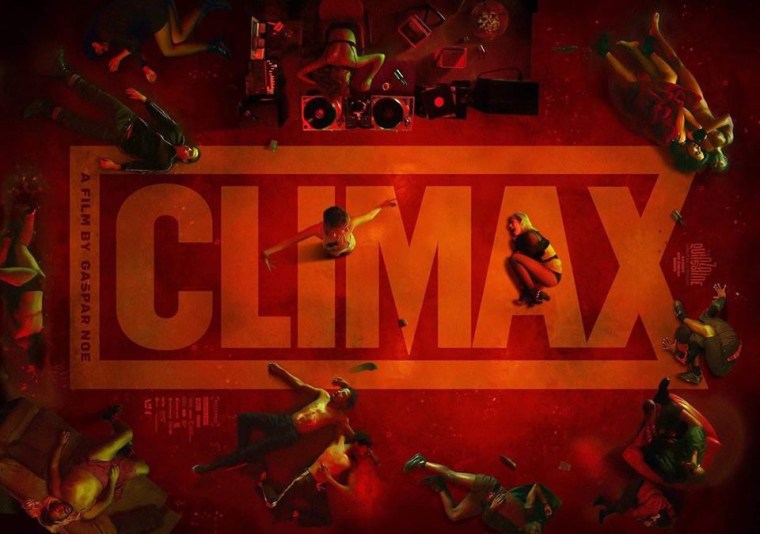 The always provocative and uncompromising French director Gaspar Noe has returned with his latest exercise in thwarting audience expectations and haunting imagery with Climax. He has been one of the most provocative filmmakers this century with his films such as Irreversible (2003) and Enter the Void (2010). He now makes a film that on the surface starts off as a story about dance and the performance artists but then tackles themes of drugs, sex, betrayal, motherhood, human nature, and even global terrorism.

The first image is of a woman running in the snow. She is wearing black and has some skin showing that appears to be covered in blood. It is a crane shot so we see most of it from the top of her head until she collapses and writhes in the snow making a bloody snow angel. The color white then disappears for most of the film until appropriately in the final shot. We see VHS footage of all the characters we are going to meet. Some speak English, others French and they discuss their goals and dreams and how dancing plays a vital part in their lives. The choreography and cinematography are both unusual and outstanding. Regardless of what the actual plot is for Climax nobody can deny the immense talent and craftsmanship it took to coordinate many of the early scenes with long takes and frenetic movements. The characters we saw are now all dancing at a party in some undisclosed basement and over the music, they are discussing their lives and desires as we learn more about their backstory and interpersonal relationships. The color red is predominant early on and even more so during the final scenes. Green is also going to become an illuminating color representing sickness. as the tone of the film shifts from our characters just having fun and expressing themselves through dance to something much darker.

About halfway through Climax some of our characters realize that the sangria they were drinking was spiked with something. The characters begin feeling sick and acting in a bizarre manner. As that happens the cinematography and lighting become more unconventional than they already were to begin with. The film starts to feel like a bad acid trip. Mysteries need to be solved and the characters begin to turn on each other and betray each other’s trust as they attempt to determine who drugged them. Two characters have to confront motherhood and they do so with very depressing results. Emotional feelings are revealed, secrets are exposed and all hell seems to break loose in an already messy and chaotic situation. The director puts the viewer in the mindset of these characters with his convoluted camera movements and sounds. This is typical of his usual work but will be unsettling to those unfamiliar with his style.

All of the performances are very brave as these actors and dancers put themselves out there in a very candid way. Sofia Boutella, in particular, gives an uninhibited performance as the closest thing Climax has to consider a lead role. The audience sees most of the story through her eyes and it makes all of the crazier moments feel palpable. Climax is not for the weak at heart. Like all of Gaspar Noe’s films, they are meant to challenge the audience visually, aesthetically, and also make them question their taste. This is not a movie meant to entertain but to explore ourselves through these characters placed in a horrific and nightmarish situation.

Also typical of Gaspar Noe is the way he displays the credits. Each one of his pictures he plays around with them in ways that audiences have never seen before and he does it again here with Climax as the credits are shown sporadically throughout the entire time with mini messages about the themes of the movie. It has a cynical view of human nature as these people that were having so much fun are now at the mercy of a person, or persons, who wanted to sabotage their carefree party. Much like terrorism, the attack on this dance party came from within and seemed to be for no reason. This is a global problem that we all have to deal with and cannot ignore and Climax is reinforcing just how we do not understand our enemy. It is all told through the metaphor of dance party done wrong but it is a movie that is never average and in fact, succeeds at being original.