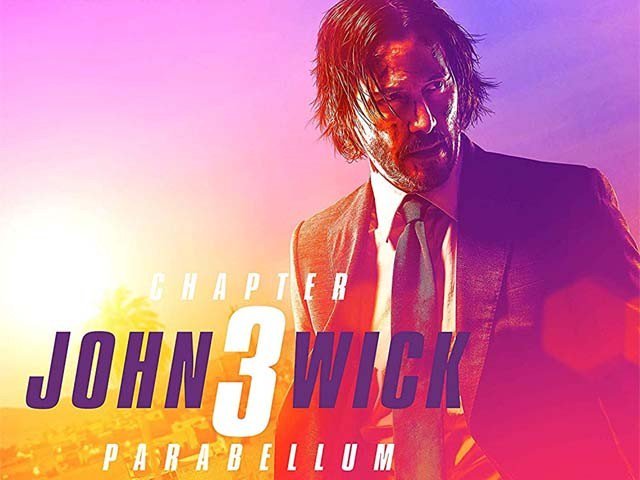 Good news and news for John Wick fans. Keanu Reeves latest turn as the title character in John Wick Chapter 3: Parabellum is one of the most exciting, action-packed, macho movies of the year. The bad news, it is really just more of the same taking place in the bizarro universe they built in the original John Wick (2014). If you want more of the same you will walk out satisfied and likely craving the next chapter. If you want to be challenged then you may walk out wishing that Chapter 3, tried to do more than just make John Wick go rogue and be hunted by his own people.

The opening shot is of the Statue of Liberty, followed by more establishing shots of New York City. Once again this is a New York that does not quite look like the real New York, nor does it follows any of the rules or logic of the real New York, or the real world for that matter. John Wick was made as pure action escapism and the laws these characters follow are strictly for their universe. The cinematography is dark yet always glossy and clear reminiscent of a cyberpunk movie like Blade Runner (1982). It reminds the audience that this is a unique world the filmmakers have created. Another Easter egg to the viewer as we see Wick running in Times Square going past a lot of ads and a giant picture of silent film star and comedy icon Harold Lloyd which is definitely a detail meant to illustrate to the audience what they are in for.

If the audience needs any more clues that John Wick operates strictly in his own dimension the first fight scene should do the trick and encapsulates everything these movies stand for. After running in the rain with his dog at night in Manhattan, John Wick runs into one of the many people that want to kill him after a $14 million bounty is put on his head in the first few minutes. They have an elaborate bone-crunching fight in the New York Public Library. Wick uses a hardcover book as a weapon and after he is done dispatching of his opponent he gently places the book back on the shelf right where he found it.

The lighting and cinematography stand out and so does the fight choreography with some of the best-orchestrated fights in a since The Matrix (1999) or a John Woo movie. Speaking of The Matrix it was nice to see Keanu Reeves reunite with his old co-star Larry Fishburne. Neo and Morpheus sharing the screen is just another sublime detail John Wick 3 has to offer. If you can accept the universe the filmmakers have created you will have a bloody fun time. If you cannot, there may be some flaws that you cannot see past. The dialogue is terrible for lack of a more tactful word. Keanu barely speaks and when he does, especially in his scenes with Halle Berry, all of their lines feel predictable and inane. There is no explanation how John Wick escapes from New York, flees to Casablanca, wanders the deserts of Morocco and then ends up back in New York for the climax other than the plot requires him to. The change of scenery was nice but feels like a different movie. If you can turn off your brain during some parts and realize that this film has little to no logic, then, by all means, see this movie. Like the previous John Wick films, it works best on a visceral and surreal level.

One final note, this is also one of the best action movies for dog lovers. Halle Berry may not have much to do onscreen but she is accompanied by two dogs that certainly steal every scene they are in. John Wick Chapter 3: Parabellum does not surprise the audience like a bolt of electricity the way the first film did, but it is a fully loaded continuation that is guaranteed to satisfy fans of R-rated, pure genuine action genre pictures.