Skip to content
‘The Peanut Butter Falcon’ Does Not Fly, It Sails like a Modern Mark Twain Tale
Movie Reviews

‘The Peanut Butter Falcon’ Does Not Fly, It Sails like a Modern Mark Twain Tale 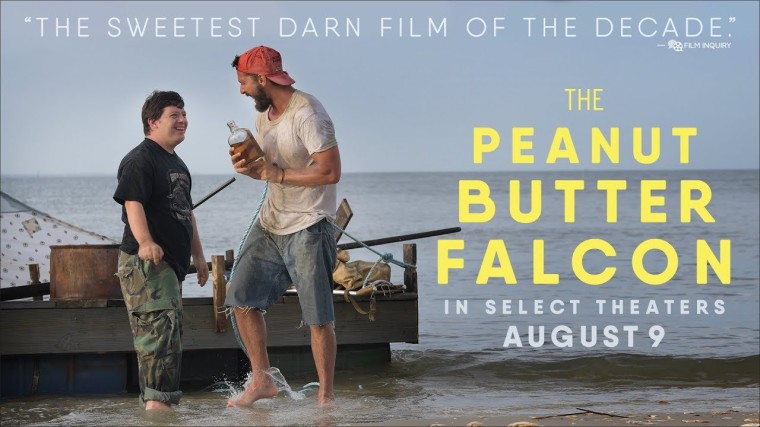 A mentally handicapped boy obsessed with wrestling and nothing to lose escapes from his care home to find his hero and make his dream of becoming a wrestler come true in The Peanut Butter Falcon. That premise sounds like an absolutely ludicrous plot but this is actually one of the warmest movies of 2019. Our main character Zack (played by Zack Gottsagen) has Downs Syndrome and no family so he is forced to live in a retirement home surrounded by elderly people. Dakota Johnson is in charge of taking care of him and when he escapes, with the help of Bruce Dern in a fine comedic supporting role as his roommate. She sets out to search for him and finds him with Shia LeBeouf as a crab poacher who is running from the people he stole from and destroyed their boat.

The opening shot is of our hero getting food and asking for extra pudding as part of his plan to escape. The Peanut Butter Falcon is a road movie that plays more like a modern Mark Twain story about two guys who sort of need each other but then develop a strong bond of friendship that feels it could last a lifetime. The movie even mentions Mark Twain about halfway through. Instead of rafting down the Mississippi, these misfit characters are rafting down the Outer Banks, trying to escape to Florida and make a stop at a wrestling school along the way.

The mentally challenged main character is a young man surrounded by old people and he wants more freedom. He has no friends, no family, and no money, only his drive to get away and pursue his wrestling fantasy. The Peanut Butter Falcon works surprisingly well because it has such a talented supporting cast. Along with Bruce Dern in a small role, the film has John Hawkes, Jon Bernthal, and Thomas Haden Church. They all contribute to enhance this low budget fable about friendship. The screenplay wisely avoids narration from either the LaBeouf or Gottsagen characters. Instead, it allocates their motives and thoughts in a gray area. That makes the story of their companionship more interesting since they both need each other. One is on the outs from his old life and cannot go back to his boat on the docks, and the other does not want to go back to his home since he has nobody there.

In the end, The Peanut Butter Falcon is a great story about friendship. Dakota Johnson’s character is the only one that does not feel like a natural fit in the world the filmmakers created and this is not her fault. The romance between her and Shia LeBeouf feels contrived and the decisions her character makes do not feel realistic considering her job. The best aspect of this film is the central friendship and viewers will really want to see these two guys go on a journey of self-discovery again and even longer if they could.