Skip to content
‘Zombieland: Dumbbell Tap’ is as Brain Dead as the Flesh Eating Ghouls on the Screen
Movie Reviews

‘Zombieland: Dumbbell Tap’ is as Brain Dead as the Flesh Eating Ghouls on the Screen 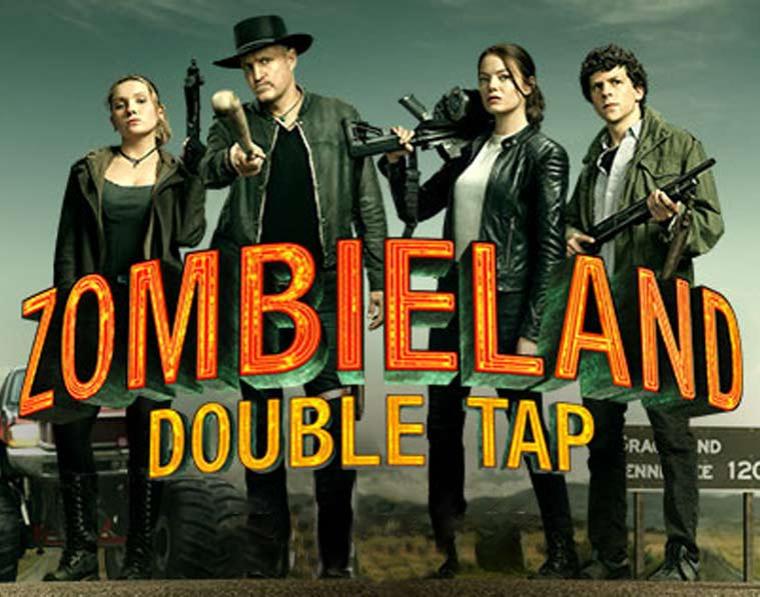 Ten years ago Zombieland (2009) premiered and was a breath of fresh air. A smart, self-aware comedy in a horror sub-genre that had been very popular that decade. It did not add much to the genre other than being a zombie movie where almost nobody dies. Even in the lighthearted zombie flicks, they rack up a huge body count and some of the main characters do not survive at the end. Now ten years later a sequel has been made that is hollow, unnecessary and lacks the social commentary and metaphysical bite of the previous film. The best aspect of Zombieland: Double Tap is that you can tell the cast and crew really like working together. It was probably done as an excuse for them to all hang out again while getting paid for it, something that Seth Rogen and his pals all have made a living out of. The content is actually beneath all the principle actors. Since the Zombieland Woody Harrelson and Jesse Eisenberg have gone on to see their star power grow and earned Oscar nominations and Emma Stone has become a huge star and even won a Best Actress Oscar for La La Land (2016). Only Oscar nominated actress and former child star Abigail Breslin is less bankable now than she was ten years ago. This may have been done as a favor for director Ruben Fleischer but this is the fourth time that Woody Harrelson and Jesse Eisenberg have worked together and beyond those two, you can see the camaraderie on the screen between everyone. If only they picked a sharper script to all collaborate on, something that challenged them as actors and not something they could sleepwalk through.

Zombieland: Double Tap does get off to a promising start by having some fun with the Columbia Pictures logo but then the first shot of a cold, snowy building from overheard is accompanied by some lazy and obnoxious Jesse Eisenberg narration thanking the audience for selecting this movie as their choice of zombie entertainment. From there, Zombieland: Double Tap just gets progressively more uninspired with each scene. They use a Metallica song early over the opening credits just like the first film did. The plot is almost a Xerox of the 2009 film with the girls fleeing and the guys want to find them. Zombieland: Double Tap is practically the same as the previous film but where that one felt fresh and unique, this one is stale and borderline rotten in some parts. It keeps referencing the first movie and repeats a lot of the same jokes, this time it is just dull and painfully unfunny.

New addition Zoey Deutch is fun when she first appears but then overdoes it with her blonde bimbo part. The blame for that should be placed on the director more than the actress for not realizing how annoying she actually is. It is doubtful that anyone could have made a good movie out of this unoriginal screenplay. The convenient writing allows everyone to be paired up with a significant other and it relies on lame jokes about geography and rules that did not even get a chuckle from the full audience at the screening I saw. People do die in Zombieland: Double Tap, whereas only Bill Murray (who does make a cameo) died in the first one. But the deaths here are primarily inconsequential and serve as plot devices for certain characters to end up romantically linked by the end. Despite all of the gore and killing on display Zombieland: Double Tap is a harmless and unoffensive endeavor that can be enjoyed by hardcore fans of Woody Harrelson, Jesse Eisenberg, Emma Stone, and that is about all it has going for it.

Skip Zombieland: Double Tap and just watch the first one. Some films are fine with unnecessary sequels that serve no purpose other than a cash grab and excuse for rich people to get paid for hanging out with each other.