Skip to content
It is Not ‘A Beautiful Day in the Neighborhood’ in this Tedious Mr. Rogers Puff Piece
Movie Reviews

It is Not ‘A Beautiful Day in the Neighborhood’ in this Tedious Mr. Rogers Puff Piece

Movie Review: A Beautiful Day in the Neighborhood 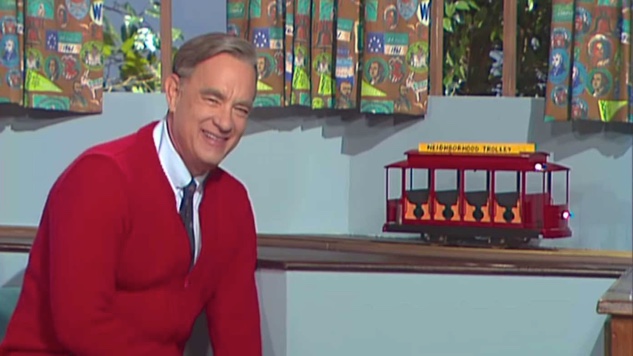 Here is how the pitch for A Beautiful Day in the Neighborhood went, “Hey. Here’s an idea for a movie that is guaranteed to sell and get Oscar buzz.”, “OK, Shoot”, “Who is the most likable actor working in Hollywood today?”, “Tom Hanks”, “Right. And who is one of the most likable dead people?”, “Mr. Rogers”, “Exactly. Let’s get Tom Hanks to play Mr. Rogers.” “But he does not even look like him.” “That’s OK, he’s Tom Hanks. He can do no wrong. Everybody likes him and everybody will like it if he plays Fred Rogers.  They are two of the most likable people from the twentieth century. Audiences won’t care that he looks and sounds nothing like Mr. Rogers. His presence doing an impersonation of someone they love from their childhood will be enough to warm their hearts and make people accept him. Plus, after last years surprise hit documentary about Mr. Rogers Won’t You Be My Neighbor? Mr. Rogers is fresh in the publics mind. We’ve gotta capitalize on this idea while it’s still hot.” “Indubitably. And let’s hire a female director since that is the trendy thing to do now especially with biopics”, “Yeah. Let’s get the woman who directed last years indie darling Can You Ever Forgive Me? with Melissa McCarthy”, “Done and Done.”

And that pitch pretty much sums up A Beautiful Day in the Neighborhood. But wait a second, you don’t come to panandslam.com for movie pitches. You are probably expecting a review. Well from the star and a half rating you can tell that this is gonna be a rough one, but I can promise you this review will not tarnish your childhood adoration of Mr. Rogers. In fact the opposite. It will make you appreciate Fred Rogers and his legacy more than this excruciatingly painful and boring biopic will.

The movie opens up letting the audience know that this is based on a true story, your eyes are probably rolling, and the first shot is the exact same opening from the classic television show Mr. Rogers’ Neighborhood with the trolley and the little models, and it zooms in on Mr. Rogers’ abode. How strikingly original. If you cannot sense the sarcasm there, then maybe you would like A Beautiful Day in the Neighborhood. I found it to be an agonizingly mundane experience in the neighborhood. As mentioned in the pitch, Hanks looks and sounds nothing like Fred Rogers but honestly, that is the least of this movies worries. He is practically a supporting character in this shoddy and pathetic movie about Mr. Rogers’ friendship with a reporter (Matthew Rhys) in 1998 where through his friendship he gets the reporter to lower his wall surrounding his emotions and as he lowers his guard he learns forgiveness just in time to make amends with his deadbeat dad (Chris Cooper) and heal his wounds with the rest of his family.

The biggest question you might ask yourself… who cares? I certainly did not and the movie makes it hard to care. It needed more Tom Hanks as Fred Rogers and less of Matthew Rhys who has the charisma of a snail playing this mopey, sad sack reporter. All of the scenes with Hanks are the most engaging but there are far too few. The rest of A Beautiful Day in the Neighborhood is filled with superficial characters afraid to open up and expose their feelings. But don’t you worry by the end they will all grow and love each other because that is the power of Mr. Rogers. It is ironic because at first the reporter does not want to interview Mr. Rogers because he says that he does not want to do a “puff piece”. This entire movie is a puff piece on the life of Fred Rogers. A more interesting biopic about one of America’s most beloved television icons would be a completely different screenplay. One that focused on some of the interesting, diverse, and famous friends Mr. Rogers had like Yoyo Ma, Wynton Marsalis, or Tim Robbins. Or better yet a script that focused on the hard work Fred Rogers did to benefit civil rights. Perhaps the best idea for a feature film about Mr. Rogers is how his testimony in front of Congress singlehandedly saved Public Television.

You might be asking yourself, “How do I know all of this about Mr. Rogers? Am I some kind of Mr. Rogers super fan? Am I obsessed with PBS?”. Nope, none of that. I simply saw Morgan Neville’s documentary from last year Won’t You Be My Neighbor? and learned everything I could possibly need to know about the man and made Mr. Rogers’ teachings relevant for the world we live in today. A Beautiful Day in the Neighborhood is not only one of the most tedious movies of the year, but one of the most unnecessary, especially after last years outstanding documentary about the subject. The only interesting thing I learned from A Beautiful Day in the Neighborhood is how say “friend” in sign language which is pretty neat and I could use. Tom Hanks is fine as he usually is, but otherwise this movie is a waste of time, talent, and money.

Skip A Beautiful Day in the Neighborhood and check out Won’t You Be My Neighbor? one of the best movies from last year.

Posted on November 22, 2019 0 By jasonpanandslam Movie Reviews Posted in Movie Reviews Tagged #A Beautiful Day in the Neighborhood, Chris Cooper, Fred Rogers, It's You I Like, Marielle Heller, Mr. Rogers, Tom Hanks, Won't You Be My Neighbor