Click play above to hear the article. by Jason F. Koenigsberg Are you sick of hearing about the coronavirus? Every time you turn on the news, or go online to […]

Are you sick of hearing about the coronavirus? Every time you turn on the news, or go online to check social media, or even check your email it is impossible to ignore the deadly threat of the coronavirus as it spreads across the globe. What started in China has not been contained and is now spreading in South Korea, Italy, the Middle East, and even right here in the US of A which has had cases popping up in states such as California, New York, Massachusetts, and probably even more places as we speak. Is the threat real? The government and the media certainly think it is limiting air travel to certain places and not allowing planes or ships to dock on our soil. This is indeed a global crisis. As a child of the 80’s I have survived my fair share of outbreaks that the media labeled as major health hazards that seemed like the end of the world. I have survived Y2K, 2012, AIDS (back in the late 80’s and early 90’s it was the equivalent of the Black Death from the Middle Ages), SARS (which also originated in China), Zika Virus, Bird Flu, Swine Flu, a recent Ebola virus scare from about five years ago, and Measles because a lot of parents decided not to vaccinate their kids. Coronavirus seems worse because of how quickly it is spreading and how governments, the World Health Organization, and the global economy have been crippled by it. The way nations are dealing with it they seem to be on the losing end. Chinese businesses are suffering, our leaders are turning this into a political issue and not a health concern, and people are so stupid they are refusing to drink Corona, a Mexican beer, because it shares the same name as the virus. Seriously, Corona sales are down because of the coronavirus.

There have been a number of films that have dealt with a worldwide plague. Infection movies that deal with an outbreak of a disease with catastrophic results the likes of which we all hope to never see. There are surprisingly not as many movies about global epidemics as you might think. Probably because it is easier to show a villain that is in human form like terrorists, gangsters, or corrupt politicians and businessmen that have become the evil masterminds James Bond can usually thwart. Plus, infections are less visually impressive than natural disasters so films like Twister (1996), Armageddon (1998), and San Andreas (2015) make an easier excuse to show off state of the art special effects while we watch man take on the weather and other acts of God as cities crumble onscreen. Viruses and bacteria can have some gross after effects on the people infected but as an interesting visual medium there is not much you can do to make people avoiding a virus seem compelling. Just watch M. Night Shyamalan’s The Happening (2008) to see what I mean. Or better yet skip that and check out Birdbox (2018) on Netflix which managed to make the subject much more engaging from a visual and dramatic stance.

Birdbox just missed my Top 5 Global Infection movies so you should check it out if you have not seen it. The scariest piece of pop culture involving a global outbreak in my opinion is Stephen King’s novel The Stand. That worked much better as a book rather than the 1994 miniseries based on the novel. One last disclaimer about my Top 5 Global Infection movies. I tried to avoid just listing a bunch of zombie movies. If I did not then this would just be a list of zombie horror pictures with George A. Romero’s Night of the Living Dead (1968) and Dawn of the Dead (1979) at the top. There is really only one title on here that is kind of a zombie movie, but it is clearly meant to be an infection movie, more like the cousin to a zombie movie. You’ll see when you scroll down. I certainly hope that the coronavirus is not as bad as any of these movies infections turned out to be. Now without any further ado here are the Top 5 Global Infection Movies.

This is the third movie based on the novel of the same name by Richard Matheson. The first two are good in their own ways. The Last Man on Earth (1964) was the most faithful to the novel and had Vincent Price as the title role, but the limitations of the time make the movie dated. The Omega Man (1971) was the second film featured Charlton Heston in action hero mode and the infected villains were rather silly but it still has its charms. I am Legend features state of the art special effects and Will Smith giving arguably his best performance. It takes the subject matter seriously and seeing Will Smith wander around a desolate Manhattan are some of the most striking images of their kind. I just wish the filmmakers did not bastardize the ending to make it so conventional and mediocre when they had all of the elements to make I am Legend a modern classic. The infection turned all remaining humans into a species of vampires that to hunt at night and Will Smith is the doctor trying to stay alive, find a cure, and find any other uninfected survivors. I highly recommend the novel and then check out the movie and see how cowardly the ending is when it could have been much more poignant and powerful. 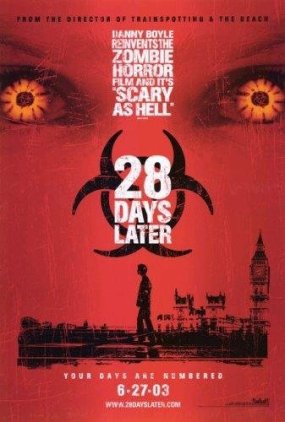 This is the one movie that could be considered a zombie movie. In fact 28 Days Later introduced fast moving zombies to the world which were later used in the Dawn of the Dead remake (2004), World War Z (2013) and many other films since. Director Danny Boyle is quick to correct anyone who calls this film a zombie movie and reminds them it is an infection movie. The infection is rage and the first and third acts are pretty heavy handed with reminding you that mankind is evil. The infection goes throughout England and seeing Cillian Murphy wake up in a hospital bed and then wander around an empty London are just as astonishing as the vacant New York City in I am Legend. Danny Boyle’s foray into the horror genre with 28 Days Later is a gripping film with palpable terror and some terrific performances, a unique soundtrack, and impressive visuals. Do not even bother with the sequel 28 Weeks Later (2007), he had nothing to do with that and it is a pretty unimaginative reiteration of the first film. Instead of embedding the trailer, here is the scene of Cillian Murphy walking around a desolate London and realizing he may be the last man alive. The digital cinematography and unique soundtrack make it seem more eerie than just a man walking alone.

This might be one of the scariest movies about a deadly virus because of how realistic it feels. Director Steven Soderbergh assembles an all star cast (you can see the names listed above) to make a truly gripping and unsettling tale of an infection that kills its victims immediately and health officials have no way of stopping it and no idea of what is causing it. It works as a metaphor for terrorism and our culture of propagating fear. This is probably the closest film to what coronavirus is doing to the world right now. Contagion spans the globe in a very unglamorous way as it shows the unknown disease spreading and infecting people on different continents. I have only seen this movie once years ago and some of the scenes and images have stuck with me. Contagion is a powerful film and if you are afraid to travel and afraid of the coronavirus, this is the movie that will likely scare you the most. It is like Jaws (1975) for people afraid to go in the ocean, Contagion will really scare you especially if you are a germaphobe. 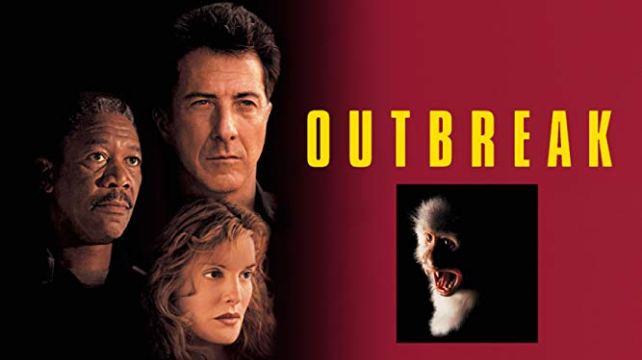 A much more fun and conventional Hollywood thriller about a deadly virus that comes from a monkey imported from Africa. Outbreak is directed by German action auteur Wolfgang Peterson and it follows the blueprint for a 90’s action film. There are good guys trying to stop the outbreak from spreading, and bad guys (led by the always reliable Donald Sutherland) that just want to contain the sick and kill all of the victims. It is an easy watch about a serious subject and has great performances from its lead actors Dustin Hoffman, Rene Russo, and Morgan Freeman plus two stellar supporting turns from Cuba Gooding Jr. and Kevin Spacey before they were both Oscar winners and way before they were blacklisted for being sexual offenders. More than any other film on this list, Outbreak is a movie of its time, for some that may be a negative quality, but I think Outbreak is just the right amount of fear mixed with big budget escapism. 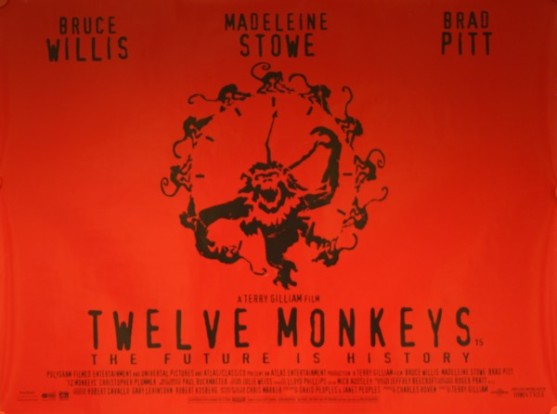 This is one of the best movies of the 1990’s and one of my favorite sci-fi dystopian future movies. From the imagination of visionary director, and Monty Python alum Terry Gilliam it is a story about mankind after they lost the battle against a deadly disease and the few remaining survivors are forced to live underground because they cannot breath the air. Bruce Willis is sent back in time to try and stop the army of the 12 Monkeys from unleashing this deadly plague on the planet. During his travels he meets a beautiful doctor who slowly believes his story that he is from the future and that he is humanities last hope. He also encounters Brad Pitt as a deranged mental patient in what could still be considered Pitt’s greatest role. He earned a well deserved Best Supporting Actor Academy Award nomination and interestingly enough lost to Kevin Spacey for The Usual Suspects. Like most Terry Gilliam movies, 12 Monkeys is a feast for your eyes with huge sets, wide shots showing Philadelphia cold and empty and occupied by wild animals much like the images of bare cities from I am Legend and 28 Days Later. The costumes and the music also help transport you into this bizarre future world and make 12 Monkeys a timeless science fiction classic with an ending that needs to be seen more than once to fully comprehend.