Jackie Brown… When Good Directors Go Bad by: Jason Koenigsberg Jackie Brown is not a terrible movie, just very disappointing. In fact there are some great aspects of this film. […] 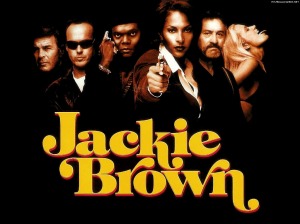 Jackie Brown is not a terrible movie, just very disappointing. In fact there are some great aspects of this film. The look of it from the opening shot (an homage to The Graduate), to the soundtrack and great performances from people you would not have expected to have lead roles in major motion pictures in 1997. It was a joy to see Pam Grier in the title role and Robert Forster did such a good job he earned an Oscar nomination. 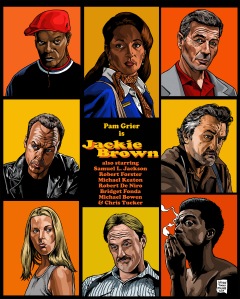 No, the problem with Jackie Brown is the director Quentin Tarantino. He has been one of the most inventive and reliable filmmakers for the past 25 years and his two most recent films (Inglorious Basterds and Django Unchained) you could argue are his best work to date. But with Jackie Brown Tarantino felt he had something to prove. 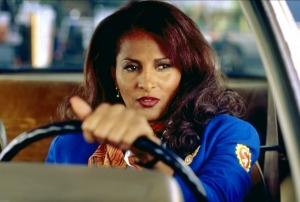 This is the only time in his career to date where I think Tarantino did not make the type of film he really wanted to make but instead wanted to prove to critics that he could conform and not give into audience expectations. Very high expectations indeed because this was the first film written and directed by Tarantino since his Academy Award winning smash hit Pulp Fiction. It had been over three years since he had directed his own screenplay (1996 Robert Rodriguez directed Tarantino’s script From Dusk Till Dawn) and everyone was salivating for the next Quentin Tarantino film. 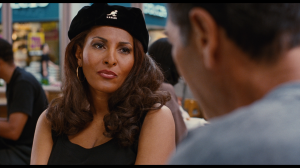 He ended up conforming and trying to make the anti-Pulp Fiction. By doing that he ended up with a final product that left a lot to be desired. One of the best aspects of Tarantino films is that he is able to give roles to actors that would not normally have those types of roles. This did wonders for John Travolta because after Pulp Fiction he experienced a career renaissance with his best film roles in twenty years. Pam Grier was not as fortunate, perhaps her race and gender were partially the reason since there are more roles for older white men than black women. Grier is excellent as a middle-aged flight attendant looking back on her life with missed opportunities and regret. However the dialogue gave her nothing really to do other than curse a lot, reminisce with some other characters who were past the prime years of their lives and take part in a heist with some low-lifes that she normally would never associate with.

The low-lifes Pam Grier has to deal with are also sub par for a Tarantino film. He always packs his films with great actors playing great characters but Jackie Brown only really has great actors. Samuel L. Jackson, one of the few Tarantino holdover’s from Pulp Fiction is here and he is pretty much doing his “shtick” waving a gun around and swearing a lot. He would get a lot of those types of roles in the 90’s. His part in Jackie Brown was not one of his more memorable roles like Jules Winfield was in Pulp Fiction. If it was not for his ridiculously silly facial hair I think we would forget about this part entirely.

Robert DeNiro is in Jackie Brown, one of the best actors of all time making his only appearance in a Quentin Tarantino film probably in a part that Tarantino envisioned for Harvey Keitel. But does anything really stand out about DeNiro in Jackie Brown? Not really, he plays his role almost as cliché as Samuel L. Jackson would play his. He meanders through the movie saying as little as possible and mumbling most of his dialogue. His only two noteworthy moments both involve Bridget Fonda, another great talent squandered by Tarantino’s script. One scene Fonda and DeNiro simply have sex vertically in a kitchen and the other scene where they stood out was when DeNiro shoots her in the parking lot of a mall when he forgets where he parked his car. 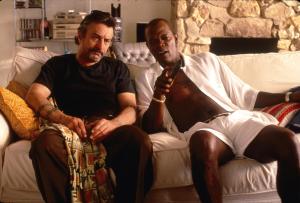 Normally Tarantino is known for writing strong female characters but I guess he gave all the strong female qualities to Pam Grier and poor Bridget Fonda was left with the crap walking around in a bikini most of the film, getting high from smoking a bong, laying on a couch and having casual sex. 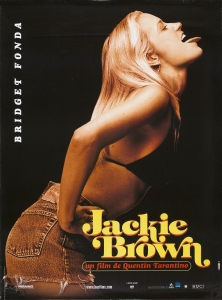 One bright spot in the film is the reliable Michael Keaton as FBI Agent Ray Nicolette. A role he would have fun with and reprise 6 months later as Jennifer Lopez’s boyfriend in Steven Soderbergh’s excellent Out of Sight. He coasts through Jackie Brown with a friendly demeanor as he investigates the heist. 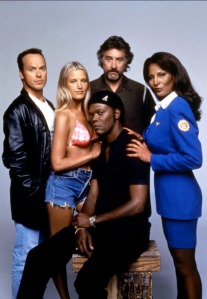 Overall, Jackie Brown is not a terrible movie, just one of the most disappointing movies I have seen because the problem with the movie is with the usually brilliant writer and director. Tarantino tried too hard to mess with people’s expectations about what he should make and not duplicate another Pulp Fiction. What he ended up with was an overlong film about lonely, middle-aged people trying to make up for their past regrets. There is nothing wrong with that and it could have made for an interesting movie except Jackie Brown is not very interesting. It’s boring, which is something I cannot say for any other Tarantino film, and that is ultimately why it is such a disappointment. 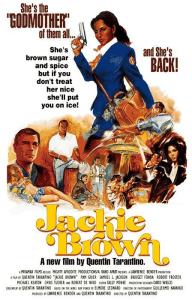 Most Tarantino films are long, many of them with running times over 150 minutes. Yet none of them feel like they are long movies. The dialogue sparks and crackles throughout his films even if it does not carry the plot forward, just like the famous Big Mac conversation early in Pulp Fiction. Jackie Brown drags during its 154 minutes. Not because of the acting, the performances are fine especially by Pam Grier, Robert Forster and Michael Keaton. The music and production design are top-notch and create a great mood and atmosphere that makes the film feel like it takes place in the 1970’s even though it takes place in the 1990’s. The problem with Jackie Brown is Tarantino’s script as well as uninspired direction and editing which goes slow enough for a sloth. Bottom line, Jackie Brown is BORING.