by Jason Koenigsberg Recently the Hollywood Foreign Press announced that they were going to honor George Clooney with the Cecil B. DeMille Lifetime Achievement Award at the 2015 Golden Globes. […]

Recently the Hollywood Foreign Press announced that they were going to honor George Clooney with the Cecil B. DeMille Lifetime Achievement Award at the 2015 Golden Globes.

My immediate thought was that this was a premature decision. Mr. Clooney is one of the biggest and most influential actors working today and has been for over the past decade and a half. Then I started to think, why not honor George Clooney. He has been a consistently reliable leading man both in front of and behind the camera of intelligent, mature and sophisticated pictures. In this day and age, that is an incredible accomplishment where most of the big studios output involves comic book action flicks, sequels and remakes, George Clooney has managed to steer clear from all of those trends, other than 1997’s monumental debacle that was Batman and Robin. He has evolved as a movie star since his days on NBC’s ER in the mid-90’s and is now more than just a handsome face, but also a symbol of quality.

Clooney has won two Academy Awards, one for Best Supporting Actor in Syriana (2005) and the other for producing Ben Affleck’s Best Picture Winner Argo (2012). With an already stacked resume of great performances with great directors, and a successful writer, director and producer, his future in movies is bright and shows no signs of slowing down. Plus his humanitarian work for helping the people of Darfur has been well documented. He truly uses his fame and power to try and improve the world.

So we should honor George Clooney and perhaps we should start to honor more great actors, writers and directors in their prime and not wait until the twilight of their careers. Pan and Slam celebrates the five best George Clooney pictures. 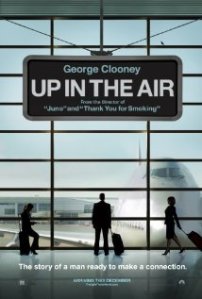 A funny, sad and heartfelt picture that reflects the time it was made also features George Clooney’s best acting to date. During the economic recession that started in 2008 when unemployment was reaching new heights this film accurately depicts what so many Americans were going through and more importantly how millions of Americans felt during this time. Jason Reitman’s film acts like a time capsule of what life was like in 2009 but it’s Clooney’s performance that makes Up in the Air work and gives it a soul. Ironically, Clooney plays a man who’s job it is to fly around the country and fire people because their bosses are too cowardly of confrontation to do it themselves. The fact that we care about this man who is afraid of human connections and risk in his own life is a testament to Clooney’s ability as a gifted actor. It is a difficult performance and there are very few actors who could have made it work.

Alexander Payne is a writer/director that specializes in humanistic and tragic comedies like About Schmidt (2002) and Sideways (2004). He was fortunate that George Clooney was able to lend humor, warmth and made the protagonist of this story very easy to relate to. Clooney plays a husband and father who barely knows his family, until misfortune strikes and his wife is in a coma from a boating accident. Throughout the film there are many moments that the audience could easily laugh and cry at the same time, but the narrative works so seamlessly due to Clooney’s vulnerability in this role. He learns that he really never knew his wife at all prior to the accident and we hope that he will not follow the same path with his two daughters since now they are really all that he has. Clooney nails it and further solidifes what we have come to expect from him as an actor, someone that can blend comedy and drama with a lot of heart while treating the audience with intelligence. 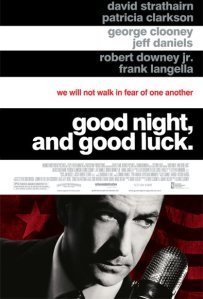 2005 was a good year for Clooney. He became the first person since Warren Beatty to be nominated for four Oscars in one year. However in 1981 Beatty did it with one film Reds, Clooney did it with two films, winning Best Supporting Actor for Syriana and being nominated for writing, directing and producing the fantastic and thought provoking drama Good Night and Good Luck. It was his second feature in the directors chair and no doubt about it, the best film he has directed to date. With glorious black and white cinematography a sparse soundtrack with no excess music prying the audience’s emotions, it re-enacted the true story of newsman Edward R. Murrow’s real life duel on air with Senator Joseph McCarthy during his witch hunts accusing people of being communists, mirroring the current state of the nation during the George W. Bush administration and the war on terrorism. He used only real footage of Senator McCarthy and that added to the realism and suspense. Clooney starred in the film but it is clearly an accomplishment of him as a talented director. A film that harkens back to classic cinema and one that Sidney Lumet would be proud of, it is also a valuable history lesson of a time in America that should never be forgotten.

George Clooney’s first great role as a leading man is still one of his best and marked the start of a superb working relationship with director Steven Soderbergh. Exactly a year after his disastrous turn in Batman and Robin Clooney rebounded with the best Pulp Fiction-style action-comedy that was not written and directed by Quentin Tarantino. Clooney plays a career criminal who gets involved romantically with a federal marshal played by Jennifer Lopez in her best acting performance. There is a lot of action, romance, witty dialogue, outlandish humor and memorable supporting turns from Don Cheadle, Ving Rhames, Steve Zahn, Albert Brooks and Catherine Keener. This was the first of many pictures that established the type of intelligent films for adults that George Clooney would come to be associated with. 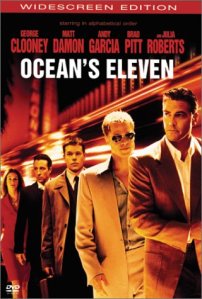 The second time Clooney’s partnership with director Steven Soderbergh would be an ensemble remake of a Frank Sinatra film and would create the only real “franchise” of Clooney’s career thus far. However, don’t let that fool you. This is very fun, clever escapist entertainment and also one of George Clooney’s best performances. He is perfect as Daniel Ocean, a debonair low-life fresh out of prison, planning his biggest heist yet, trying to rob a casino owned by Terry Benedict (Andy Garcia) who coincidentally happens to be dating Daniel Ocean’s ex-wife played by Julia Roberts. Also starring Brad Pitt, Matt Damon, Don Cheadle, Bernie Mac and Carl Reiner, Clooney leads all of these talented actors at the top of their game. Normally films with big casts are not as splendidly composed but Soderbergh was really hitting his stride as an auteur and Clooney delivers one of his most memorable performances. He is flawless in one of the smartest, most entertaining and most indelible pictures of his career.

George Clooney was also great in Michael Clayton (2007), O Brother Where Art Thou (2000), Three Kings (1999), From Dusk Till Dawn (1996), and Burn After Reading (2008). I am sure that his stellar work in front of and behind the camera, as well as his humanitarian endeavors will continue for many years to come.