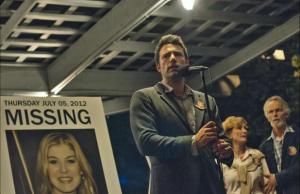 David Fincher’s newest film Gone Girl is a dark and twisted mystery but it is also a deep allegory about how far people will go for love and marriage. Based on the best-selling novel by Gillian Flynn, who also wrote the screenplay. I was a huge fan of the book and by the end of movie, all of my apprehension about the adaptation was gone and I was smiling inside. If you know the story do not judge me for being so overjoyed, Fincher, Flynn and the two leads Ben Affleck as Nick Dunne and Rosamund Pike as his missing wife Amy are all reliable and at the top of their game.

After some great establishing shots of Missouri going through tough economic times, the film opens as the novel does with Affleck’s Nick getting a phone call at the bar he owns, that his house appears to be broken into. He goes home to find what appears to be the scene of a struggle and his wife Amy nowhere to be found. The police come, they begin to investigate and the search begins as does the intricacies of our main couple and the next 145 minutes are the detectives following Nick as he traces Amy’s steps before she disappeared and we learn some very unsavory facts about our husband and wife and learn they are not exactly what they appeared to be to their friends and family.

David Fincher has evolved as one of the best directors working today and he has experience with stories that involve a strong female lead (Panic Room and The Girl with the Dragon Tattoo) but Gone Girl is actually more akin in its tone and pacing to his 2007 film Zodiac, the most comprehensive and intelligent film ever made about a serial killer. The cinematography looks great and captures Middle America going through a tough economic transition. A lot of shots are dark and subconsciously remind the viewer that this is a mystery and not everything on the surface is well lit because it may not be what the audience thinks it is. Some shots are filled with juicy little blink-and-you-miss-it moments from the book. Once again I do not want to reveal any clues but fans of the book who know the story will be content. Novices will enjoy the emotional and mysterious journey through the narrative.

Ben Affleck delivers his most nuanced performance and plays Nick Dunne perfectly. Never too mean and unsympathetic but never too nice where you trust him fully. His gestures and mannerisms fit with a man who may or may not know more than he is letting on and may have a trick or two up his sleeve. Rosamund Pike, a British actress who is a familiar face from Die Another Day, Doom, and Barney’s Version is spectacular as Amy. If this film is a hit, she should become a household name and a serious contender at awards time. Plus, in what may seem like stunt casting, Neil Patrick Harris and Tyler Perry (yes, that Tyler Perry) are very suitable and adept in their roles as a boyfriend from Amy’s past and a hot shot attorney respectively.

The score by Trent Reznor and Atticus Ross is subtle and compliments the film superbly. It is not as grand and showy as their music for Fincher’s previous two films The Social Network and The Girl with the Dragon Tattoo, the former of which they won the Academy Award for best original score.

The best part about Gone Girl is what the film leaves you with after it is over. The mystery is a great ride, the twists are fun and the characters are complex and slightly disturbed. But the actual theme of the movie is what stuck with me long after the end credits. This story asks its viewer to question and examine their definitions of love and marriage. How far would someone go for love? When is love a good emotion worth fighting for and when is it a destructive force? What extremes should people go through to save their marriage? How far is too far and if two people are in a marriage and no longer in love? Are we who we really are once we get married or do we put on a front for our friends, family and even our own spouse so that we can stay in the marriage?

These are all the thoughts that ran through my head after the film was over. If you believe that marriage is a futile and dated institution of our society then Gone Girl will pat you on the back and make you want to stay legally single. However, if you believe that marriage is a necessary commitment and that it is the truest symbol and form of undying love, then Gone Girl will also reinforce the powerful impact of marriage and why we need it to fully express and commit to the person we love.

I may come across as vague with plot points because I want to be extra careful not to reveal any plot points or character developments for anyone that did not read the book. I will just say if you read the book, sit back, relax and enjoy the mystery as it unravels on screen. You have nothing to be afraid of, the picture is masterfully made and everyone involved is at the top of their game. If you have not read the book and are unfamiliar with the plot, you will love it even more. The twists and turns work even better if you do not know the story. The person I saw it with had not read the book and I could hear her and the whole theater gasp during certain key developments. Hopefully you will walk out of the picture smiling and as satisfied as I was, and then maybe feel a little bit guilty about it, but you shouldn’t, it’s one of the best films of the year.