Chappie Works as a Metaphor of Every Single Parents Worst Nightmare

Science fiction is becoming increasingly hard to create unique visions of the future on film. We have seen so few original visions and often even the very good ones are derivative of other great science fiction films. In 2009 Neill Blomkamp defied the odds and created an ugly albeit unique vision of the future with District 9 about alien refugees being stuck in Johannesburg, South Africa. His follow up film, Elysium from 2013 was a heavy handed allegory about our healthcare systems and the shrinking middle class on a global socioeconomic scale that I thought worked even though it was inferior to District 9 and had some very good ideas and high octane action.

Blomkamp’s newest film Chappie is derivative of his first two features yet despite that, I still found a lot to admire and enjoy as I entered a dystopian Johannesburg this time dealing with mankind toying with artificial intelligence and its impact on evolution.

Chappie opens up with news reporters (including Anderson Cooper) and talking heads describing events that have lead toward a jump in evolution, the film then jumps back 18 months earlier to Johannesburg where the police force is made up of robots and it has proven to be a success. This is where our story takes place and we meet people who work for the corporation that created these crime-fighting androids, the main computer programmer (Dev Patel), the CEO of the company (Sigourney Weaver) and a jealous designer who wants his idea on the street and not the one that the company has manufactured (Hugh Jackman). Dev Patel’s character is lonely and lives on his own with robot friends he created much like J.F. Sebastian, the man who created the Replicants in Blade Runner (1982). He wants to experiment in creating an artificial intelligence that is like a human, one that can learn and develop emotions. His plan goes awry when he is carjacked by low-life criminals (played by Ninja and Yolandi Visser) who want a police droid to protect them against other gangsters and aid them in their crimes. This sets in a course of events that involves the android Patel created (whom they name Chappie) being pulled to do good and bad actions and since Chappie acts like a child who can learn fast he is forced to grow up fast and make decisions that could help or hurt a lot of people. 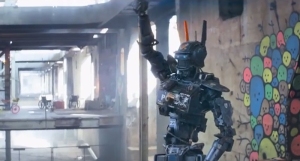 The story lacks in originality. It takes a lot from Blade Runner and at times plays like a cheap imitation of Robocop (1987). It also did not transport me to a new world like Blomkamp’s District 9 did, in fact it felt like it took me to the same world I visited in District 9 and Elysium. However I have to admit I liked where this movie took me and what it had to say about human nature and technology.

Chappie is a metaphor of every single parents worst nightmare. Their child being forced into a game of tug of war where their values are pitted against the values and actions of the other parent that they inherently disagree with. We see Chappie being loved and taught by a nurturing mother and then torn away from her by a selfish father who wants to use Chappie only for committing crimes to fatten his wallet. On top of this our title character is conflicted with Dev Patel’s character, whom he calls his “maker”. This parallels children’s, or everybody’s, frustration with God, our “maker”. He asks his maker about life and death and why they have to be. Chappie is filled with some deeply philosophical moments that I found endearing.

I also really liked how Chappie ended. It was refreshing to see that there was no epilogue or over drawn explanations about what we had just seen. That is a trend too many movies are caught in these days. It ended where we know what happens and whether we like it or not it’s an appropriate ending that we can discuss as we walk out of the theater.

The fact that Chappie took a lot from other films was not my biggest problem with the film. My biggest complaint is with Hugh Jackman. He is without a doubt a talented actor and was the best part of that horrible Les Miserables film from three years ago, but the way his character was written, he seemed like he was walking off the set from another movie. From his constantly angry facial expressions to the way he delivered his lines, he was set on autopilot to be the bad guy and there was no moment where I bought his character as the jealous programmer who wanted his robot out on the streets and not Dev Patel’s. His scenes slowed the pace down to a screeching halt everytime he was on screen.

Speaking of his robot, this was the most blatant plagiarism in all of Chappie. His “Moose” creation was practically identical to the ED-209 machine from the original Robocop. Not enough thought went into any part of his character and it really showed.

Even though this picture is not as mind blowing as Blomkamp’s first feature (District 9 remains his masterpiece) I still enjoyed the journey his vision took me on in Chappie, much like I enjoyed Elysium. I remember stating that one of the many reasons I liked District 9 is that it was the only film I had seen that dealt with an alien being forced to act as a single parent, that thought had never occurred to me before. Well in Chappie we get to see that theme from a different side and the aliens are replaced with mechanical beings. Yes, I realize there are a lot of plot holes and illogical moments to further the story, but I enjoyed the ride. All of Blomkamp’s features are similar visions of a future that is ugly but laced with hope. His movies are thought provoking and kinetically charged. After Chappie it is obvious that I like his visionary direction and eagerly await what he has in store for us next. (In case you did not hear he is making an Alien film with Sigourney Weaver reprising her role as Ripley. I know I am excited for that!).

Below you can find the theatrical trailer for Chappie as well as the trailers for Blade Runner and Robocop two science fiction films made in the 1980’s that hold up and are vastly superior to every dystopian future film made this century. If you have not seen either of these and if you enjoy smart and challenging sci-fi then do yourself a favor and seek them out.