by Jason Koenigsberg     We all know that the studios make some very smart movies and they also make a lot of very stupid movies. Sometimes those two concepts mix brilliantly […]

We all know that the studios make some very smart movies and they also make a lot of very stupid movies. Sometimes those two concepts mix brilliantly and create a delicious brew of being simultaneously intellectual and inane. Every so often they actually make great stupid movies intended for smart people. I am not talking about films like Airplane (1980) or The Naked Gun (1988), those films are a laugh-a-minute and so obviously stupid they can be enjoyed by anyone. I am talking about films that are brainless on a superficial level but have subtext that actually deal with important themes in a very unusually inept manner and maybe it happens the first time you watch it or the second, third or eighth time and you realize, “this is actually pretty brilliant, no wonder it flopped and lot of people did not get this”. You will not find on this list anything like Mel Brooks’ Blazing Saddles (1976), Martin Scorsese’s After Hours (1985) or The Coen Brothers’ O Brother Where Art Thou (2000); those films are genuinely brilliant comedies. They might have silly moments but do not fit my definition of stupid, let alone stupid in an intelligent way. Just missing the cut were Fletch (1985), Bill and Ted’s Excellent Adventure (1989), and Tenacious D in The Pick of Destiny (2006).

Spielberg’s first major flop is actually a very funny screwball farce about what if the Germans and Japanese attacked Los Angeles during World War II and how America would react. A lot of historical references throughout, and when the general is seen crying hysterically as he watches Dumbo (which was originally released in 1941) is a funny and smart moment to savor. I could not find that clip but the trailer does a great job capturing the manic atmosphere of the film while showing off its all star cast and John Williams’ rousing score.

Unlike a lot of films on this list, Borat was a huge hit at the box office and was on many critic’s top ten lists. However I feel many people laughed at the raunchy moments and did not truly embrace the films brilliance as a satire about a foreigner traveling across the country and discovering America, starting off in New York City, ending in Hollywood and having hilarious encounters with unsuspecting people in middle-America, this is sharp and witty satire comparable to anything Mel Brooks made in his prime. It also pays loving homage to pioneers of comedy (especially Charlie Chaplin and the Marx Brothers, even his mustache looks like Groucho’s) throughout; anyone who really knows their cinema history will pick up on those tributes when they happen. Below is a deleted scene I wish they kept in because it is a brilliantly hilarious satire on American excess and consumerism.

Another hit comedy and possibly the best movie to be inspired by a Saturday Night Live sketch, Wayne’s World is an inspired send-up itself. This is very smart comedy in the guise of stupid 90’s slackers going up against big corporate America. This movie features some of the best use of breaking the fourth wall since Woody Allen. It is a stupid movie but brilliant with the way it was acted, written and directed. Below is one of the funniest and most memorable scenes that put a Queen classic back on the billboard charts.

The fourth Rambo adventure is a brilliant blend of gratuitousness for an important social cause. On the surface this is an exercise in unnecessary violence that is on par with a lot of earlier Stallone, Schwarzenegger or Van Damme action films, but beneath it is actually a film with a political message about the current situation in Burma/Myanmar that the rest of the world is ignoring. I find it sad that this film was one of the biggest things that raised awareness about the human rights violations taking place in Southeast Asia today and that makes this an important film and then adds layers of depth making its graphic violence seem less gratuitous and more an alarming cry for help and human rights. Watch the trailer below.

At a glance this is just a stupid run-of-the mill sports movie for kids about a bunch of misfits and losers taking on the big more privileged children. However, this has ended up being one of the most influential sports pictures since Rocky, which was coincidentally released the same year. Go back and look at every kids sports movie throughout the 90’s and they are all just different variations of The Bad News Bears. From The Mighty Ducks (1992) to Little Giants (1994) to The Bad News Bears remake (2003) and everything in between, this is the one that started it all. It’s stupid and its characters are all stereotypes but this has emerged as a brilliant picture in its own way. Click below to see Walter Matthau’s unconventional pep talk to little leaguers.

Previously mentioned in my Mike Nichols tribute What Planet Are You From? is one of the most randomly eccentric movies I have ever seen. It is very stupid at times yet simultaneously very heartfelt. An unexpected sentimental comedy about dating and staying happily married involving aliens who need to reproduce with women from Earth. Featuring some very good but odd performances from its talented cast lead by Garry Shandling, Annette Bening, John Goodman and Ben Kinglsey. It flopped in theaters and was reviled by most critics, I found this to be a charming, smart and uproariously funny comedy. Below is the trailer, seek out this quirky and unique comedy.

Kevin Smith was one of the indie darlings to come out of the 1990’s. He was once was regarded in the same vein as filmmakers like Quentin Tarantino, Richard Linklater and Robert Rodriguez. Clerks was the film that put him on the map and sort of epitomized the 90’s slacker revolution. It is no doubt a very stupid movie but has some of the raunchiest and sharpest dialogue about the little moments we all share. Salsa shark and the bathroom incident are very dim-witted and funny, but scenes like the “I don’t appreciate your ruse” in the video store and the discussion about the construction workers building the second Death Star are truly inspired moments that Kevin Smith has never really topped. Click below to see to a smart conversation about Star Wars politics.

3. The Adventures of Buckaroo Banzai Across the 8th Dimension (1984) directed by W. D. Richter 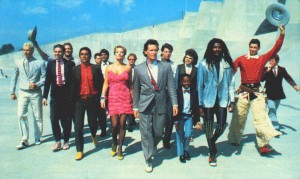 Ever see Back to the Future? Of course you have, well this movie is like that only if it were on a family friendly acid trip. It’s like how Nickelodeon’s Pete and Pete was a bonkers version of The Wonder Years. This movie is absolutely gonzo in its randomness. The plot and synopsis are enough to boggle anyone’s mind, here it is copied from imdb: “Neurosurgeon/Rock Star/Superhero Buckaroo has perfected the oscillation overthruster, which allows him to travel through solid matter by using the eighth dimension. The Red Lectroids from Planet 10 are after this device for their own evil ends, and it’s up to Buckaroo and his band and crime-fighting team The Hong Kong Cavaliers to stop them.” That should speak for itself but there are also some very inspired jokes and the plot of Orson Welles’ radio broadcast of Martians landing is explained and becomes essential to the story to defeat aliens (all named John) lead by John Lithgow and Christopher Lloyd hamming it up in their most over the top performances. Below is the trailer which is almost as strange as the movie itself.

The second science fiction film on this list and the second non-comedic film is without a doubt one that was meant for audiences to see as a satire about democracy leading towards fascism and how eerily similar they can be and how war can make fascists of us all. One of the most tongue in cheek and sarcastic films ever made, it was almost done too well because most people dismissed it as a big budget special effects movie with bad acting. Paul Verhoeven is a Dutch filmmaker who came to Hollywood and found success with a string of films; Robocop (1987), Totall Recall (1990) and Basic Instict (1992). Then he directed the monumental flop Showgirls (1995) and followed that up with Starship Troopers, which also failed at the box office. Verhoeven is too smart of a director to make an adaptation of Robert Heinlein’s novel without adding his satire. The moment I saw Neil Patrick Harris walk on screen in an SS uniform I knew that there was a lot more this film was trying to say about war propaganda, the media and the direction world governments are heading in. Scary that in some ways a lot of what he put on screen is possible or has already happened, minus the giant bugs and space voyages. Embedded below is a scene with unfinished FX but I love how it shows how maniacal and funny Paul Verhoeven is.

1. Monty Python and The Holy Grail (1975) directed by Terry Gilliam and Terry Jones

Without a doubt, this is the quintessential stupid movie for smart people. In fact all of Monty Python’s humor fits that qualification. From their show Monty Python’s Flying Circus to Life of Brian (1979) to their other films and comedy specials, they can go from jokes about European colonization to silly walks, from singing about philosophers to repeating the word SPAM. To fully get their humor I think one has to have a wide knowledge of everything and also enjoy seeing absurdity right in front of their faces. Monty Python and The Holy Grail was their first and best film. Countless scenes lampoon the British monarchy and history from the middle ages. Discussions about different types of government are preceded by a grown man hopping on an imaginary horse while another man is banging two coconut halves to create the sound of a horse’s gallop then we have so many more send ups of British and royal traditions being lambasted. This is the cinematic definition of brilliance in its stupidity. Check out the scene below between King Arthur and the Black Knight, my personal favorite scene and one of the films most famous.