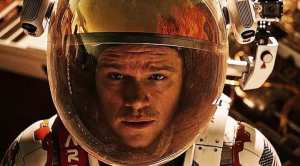 Ridley Scott’s newest sci-fi drama The Martian is getting comparisons to Apollo 13 (1995) and Gravity (2013) for it’s realistic take on space travel and the main plot to save an astronaut stranded in outer space. However the film is such an intriguing story of survival, it felt more like Castaway (2000) in space because of its protagonist having to deal with isolation and loneliness for the majority of the picture.

It starts off with a beautiful opening shot of the red planet from space, and then another gorgeous shot of its surface. Then, like Gravity it dives right into the action. We meet our main character Mark Watney (Matt Damon) and his crew led by their commander played by Jessica Chastain. In the first ten minutes a huge dust storm hits, during the ensuing chaos Damon is hit by debris and flies off, his fellow astronauts assume he is dead as they scramble onto the ship and need to take off or they will all die from the storm. Obviously we know they are mistaken and we see Matt Damon alive in red sand, stranded on a barren planet.

Like most of Ridley Scott’s other movies, the audience is treated to a very good-looking picture with the finest production value around. It features great cinematography especially with the scenes on Mars, but the shots in space and Earth are just as first-rate. One might not usually notice the sound effects but with The Martian it is impossible not to. Look for this to film to get Oscar nominations for best sound effects, sound editing and mixing when the nominees are announced.

It also had some great set design, never looking too futuristic but always looking for realism, which was what The Martian strives to achieve, and often does. Maybe for people who live and work in the science fields they will be able to find fault with a lot of the concepts and problem solving Matt Damon has to do in order to survive on an isolated planet, or NASA’s plan to rescue him, but for the average moviegoer a lot of the science and chemistry seen on display in the film will be taken at face value and they work to drive the plot so our hero can survive a little bit longer than he should. It featured a nice montage early on demonstrating the ingenuity of our hero trying to grow food on Mars.

The Martian delves into the political aspect of NASA and does so better than last years Interstellar. Jeff Daniels as the Head of NASA gave a stand-out performance, he played it as if he were NFL Commissioner Roger Goodell during a press conference. Especially refreshing was that this film had no clear villain. All of the supporting characters felt realistic and they all had different things as stake that drove their decision-making.

The supporting performances were good all around, but the real achievement here is the acting from Matt Damon. He plays the lead well, always believably and with a wry sense of humor that adds levity and realism. He never gets too dark which he easily could have but his performance is just right for the tone of the film.

By the time The Martian is over you feel like you spent a lot of time on Mars (or in the theater) and are ready to go back to Earth (or just your house). The pace of the film really slowed down in after Matt Damon’s character suffers a devastating setback and the need for him to be rescued becomes more paramount. Despite the second hour dragging and feeling longer than it actually was, The Martian is an overall rewarding and ultimately crowd-pleasing experience.

Ridley Scott has had a long and diverse career genre hopping and making various big budget pictures with an epic feel, but where he succeeds the most is in science fiction with his masterpieces Alien (1979), Blade Runner (1982) and I was a huge fan of his triumphant return to the genre with Prometheus (2012). The Martian is in a very different vein than those films. It is grounded in realism and it works as a drama celebrating human ingenuity and survival.