The Martian Reviewed by a Space-Nerd

Another Opinion: The Martian 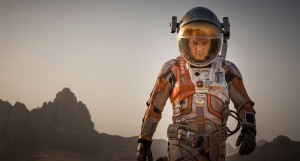 Fair truth in lending: I am a full-on space nerd. I watched the “Physics of Interstellar” on blu-ray before I watched the movie. I play Kerbal Space Program and Take On Mars in my free time. I binge watched Cosmos. Both versions. I follow the SpaceX, NASA and ISS twitter accounts religiously. I never really grew out of the “I wanna be an astronaut” stage. That’s me. So what did I think about “The Martian?”

In an era where no one followed the Apollo pioneers back to the moon and no human has left Low Earth Orbit since the 1970s, The Martian’s message is a dare from the filmmakers to use our ingenuity and explore in the face of adversity. Why? Because it’s there.

This is a film by nerds, about nerds and for nerds (but anybody could and will enjoy it). It’s easy to compare this movie to Gravity, but without any of Alfonso Cuarón’s gut-wrenching terror at being marooned in space. Imagine Sandra Bullock making jokes as she went about saving herself from certain doom and enjoying the view instead of lamenting her fate and you’ll get a pretty good feeling for what this movie is like.

Damon’s Watney is a protagonist that is easy to root for. He’s witty, smart and has an indomitable attitude we all would hope to have in a similar situation. Watney’s attitude may in fact be the least realistic thing about The Martian. Despite insurmountable odds and everything constantly going wrong, Watney cracks a joke and soldiers on. Truth be told, Watney doesn’t have much of a character arc, other than at the end of the film he’s better at surviving on Mars than at the beginning. The Martian is less concerned with Watney’s “will to live” but focuses instead on “how to live.”

Ridley Scott could’ve easily spent more time on the pervasive grief a marooned astronaut would feel: the feelings of loneliness, abandonment and hopelessness. But we’ve seen that movie before: Gravity and Castaway and even Matt Damon’s previous turn as an abandoned astronaut in Interstellar. But The Martian is fundamentally different in that it makes being stranded on Mars sound… kinda fun. The Martian is more about solving the problems of surviving on Mars and less about finding a reason to come back to Earth.

And here the film succeeds. The film is thoroughly grounded in our physical reality without feeling compelled to explain all the scientific concepts to the audience. The source material had a slavish devotion to realism and even used some of the preeminent concepts for a Mars mission as it’s basis. The Hermes is indeed a version of the “Mars Cycler” proposed by Buzz Aldrin, et al., and the Ares mission concept is very similar to the Mars Society’s “Mars Direct” mission design. A real Mission to Mars will likely take a very similar form to The Martian and gives the film good scientific grounding.

However, rather than delve into the esoteric minutiae of potato crop yields, chemical reactions, spacecraft aerodynamics or ASCII tables (as Weir’s book did to my delight), these concepts are merely hinted at by the film’s characters. As a nerdy space-enthusiast, I appreciated the nod to realism and I think it works even if you don’t know or care to know what “delta-v” is. The laws of physics reign supreme in the world of The Martian, but don’t require any advanced knowledge to enjoy it.

This is a film about inspiration, too. As opposed to Gravity’s message, which I felt was more akin to “space is scary” and it takes incredible will to survive there, The Martian asserts that space is hard and takes  incredible smarts to survive there, and is worth the risk. You get the feeling at the end of The Martian that even after surviving his ordeal, Watney would go back. “Everywhere I go, I’m the first,” Watney says, and this is true for our efforts at space exploration, and, in and of itself, reason enough for me to justify the costs and dangers.

If you find the adventure and science in this movie at all compelling, I heartily recommend Andy Weir’s book, also titled “The Martian.” Even if you’ve seen the movie first, learning the science of how Watney problem-solves his way back to Earth still makes it a compelling read. If you’re looking for more of the same, try “Seveneves” by Neal Stephenson or “Red Mars” by Kim Stanley Robinson.