By Jason Koenigsberg One of the best character actors of his era has passed away. Jon Polito was always a welcome presence in movies and television and brought a heartwarming […]

One of the best character actors of his era has passed away. Jon Polito was always a welcome presence in movies and television and brought a heartwarming charm with his portrayal of short, good humored curmudgeons. He was a favorite of the Coen Bros. and starred in five of their movies, Miller’s Crossing (1990), Barton Fink (1991), The Hudsucker Proxy (1994), The Big Lebowski (1998) and The Man Who Wasn’t There (2001). That resume alone is an impressive body of work, especially his role as an Italian crime boss in Miller’s Crossing and he had such a memorable part as the ‘Brother Shamus’ private detective in The Big Lebowski even though he was only on the screen for less than three minutes.

I guess since the Coen Bros. are some of my favorite filmmakers, by default that makes Jon Polito one of my favorite character actors. His work on film did not stop with just great parts in Coen Bros. movies. In fact if you were to omit those roles one could look at his filmography and see a slew of very impressive roles in a lot of very memorable and diverse films. Starting in the mid-eighties he made appearances in the cult horror film C.H.U.D. (1984), action flick Remo Williams: The Adventure Begins (1985) and the original Highlander (1986).

He continually worked but in the early nineties he really hit his stride and made an impression on millions with his work in so many big films starting with the Coen’s Miller’s Crossing but followed that up with one that really made an impression on me as a child in the movie theater. The first time I saw Jon Polito was as Bigelow in The Rocketeer (1991). I thought he was hilarious running around with his short, stocky stature, shiny bald head and pencil thin moustache. Plus it was Jon Polito who was the one who coined the phrase ‘The Rocketeer’ and gave Bill Campbell’s vigilante his iconic name and the movie it’s title. That always resonated a lot with me.

From that point on it seemed like Jon Polito started showing up in a ton of great movies during the nineties. Along with the Coen Bros. movies mentioned above he was in The Crow (1994) as a low life pawnbroker, the main heavy in Blankman (1994) opposite Damon Wayans, and he had a hilarious turn in the Daniel Stern star-vehicle Bushwhacked (1995). He lent his distinctive raspy voice to Homeward Bound II (1996) and Stuart Little (1999).

Polito steadily worked in films throughout the twenty-first century with great directors. He had a bit role in John Boorman’s The Tailor of Panama (2001), where he has a great early scene getting a suit tailored by Geoffrey Rush which is the funniest moment in an otherwise serious film.  He starred in Clint Eastwood’s Flags of Our Fathers (2006), Ridley Scott’s American Gangster (2007), and Ruben Fleischer’s ill fated, but star studded Gangster Squad (2013). Jon Polito was always great at adding humor to an already funny film or lightening the mood of an otherwise serious picture. 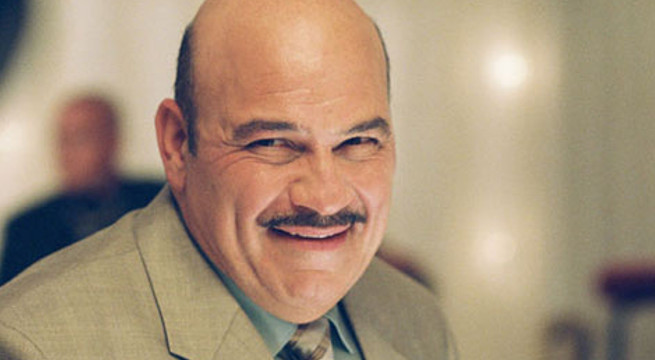 That covers his thirty plus years of work on film, but that is only half of Jon Polito’s legendary resume. His career started on television with The Gangster Chronicles back in 1981. Polito’s work on the small screen was just as memorable with parts in Roseanne, Murder She Wrote, Tales from the Crypt, Dream On, and Homicide.

One of his best roles was as Jerry and Kramer’s landlord Silvio on Seinfeld. His comic timing was impeccable and he had an infectious energy in all of his parts, never was that more apparent than his hilarious moments from a very funny Seinfeld episode.

I once stated that Jon Polito was great but that he was the guy you call when you cannot afford Danny DeVito, or the part is too small and you know DeVito would turn it down. Well obviously I was not the only one to think of him as a poor man’s Danny DeVito because the makers of It’s Always Sunny in Philadelphia ingeniously cast him as DeVito’s brother Gino on the show for one of it’s most memorable episodes.

Most recently he had been a memorable recurring character on the hit ABC sitcom Modern Family as Ed O’Neill’s diminutive and unscrupulous business rival in the closet-making industry.

Throughout film and television, for the past thirty-five years Jon Polito has popped up in our lives and made our pop culture a little but funnier and little bit more memorable with his oddly appealing screen presence. He was one of the best character actors of his generation and will be missed.

Here is a compilation of his scenes from the hilarious Seinfeld episode described above. Seek out any of the great Coen Bros. films he has starred in to appreciate the way Polito enhanced some truly great movies.