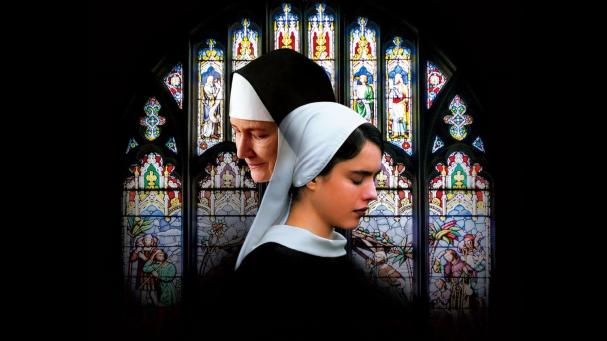 Movies about nuns are few and far between. Other than the exploitation movies involving nuns with guns, or nuns getting it on doing evil sinful business, their lives remain a mystery even to many Catholics. Novitiate attempts to  reconcile this. The title refers to nuns being trained and where they are housed during their apprenticeship. This movie makes the apprenticeship to being a nun look equivalent to Navy SEAL basic training.

Novitiate opens up with text explaining Pope John’s plan of Vatican II from 1959. An undertaking to reorganize and update the Catholic Church and make the religion more modern and appealing. The first image is a wide shot of a church/convent and we see a single nun walking briskly across the yard. It informs us that this is 1964 and that opening shot will have more relevance towards the end of the film. Margaret Qualley, famous for her role in HBO’s The Leftovers and being And MacDowell’s daughter, is the main character and has narration that bookends Novitiate with descriptions of her belief and love for God and her troubled past.

Qualley plays Kathleen, an 18 year old novitiate living in the convent. We see flashbacks of her character as a child from a broken home who eventually grows up to be a lonely adolescent and is seduced by the promise of love and sacrifice to God. Since she has no other love or affection in her life she is enticed by the Papal hierarchy looking for a place to belong. Margaret Qualley gives a performance that embodies humbleness and should be discussed and admired. She conveys an expressionless manner with only the most subtle excitement for her love of God and Christ that is very difficult to successfully pull off yet still coax the viewer into knowing how her character feels.

As terrific as Margaret Qualley is, the best performance in Novitiate is without a doubt Melissa Leo as the Reverend Mother with her old school Draconian ways of running the convent. She commands the screen only allowing the audience to see her face since her head and body are covered in heavy nun attire. Melissa Leo is terrifying and is better than her Oscar winning role in The Fighter (2010). Julianne Nicholson is also very impressive as her role as Margaret Qualley’s mother who does not understand why her daughter would choose a life of celibacy and solitude as a nun at such a young age. Novitiate provides heavy dramatic roles for women. They are never objectified as sex symbols or used as companions for male counterparts. These serious ensembles are usually movies reserved for men, but these actresses adeptly handle a very smart script. All except one actress. Morgan Saylor, known for her role in Homeland on TV is horrible. There is no nice way to say it, her scenes are abhorrent and she is the only actress that cannot handle her substantial dramatic scenes on the same level as the other performers.

Early on Novitiate makes being a nun look very dark and unappealing. About half way through the rigorous training the viewer will realize that it takes a very special kind of young woman to make it to being a nun before the modernization of Vatican II. Along with the acting, Novitiate deserves praise the way it touches on the power struggle between priests and nuns, men and women and their roles in the Catholic Church. The screenplay questions faith in God and the importance of tradition and when traditions should change. Even though some religious traditions seem so old school they border on being barbaric, they hold value to certain people and even the women in the convent that were hurt the most by certain traditions appeared heartbroken once they were revised. Transition is never easy, especially in religion. For all the people it can benefit, it hurts just as many. Ultimately Novitiate is about the importance of a higher power and about wanting more than what we are told to believe.