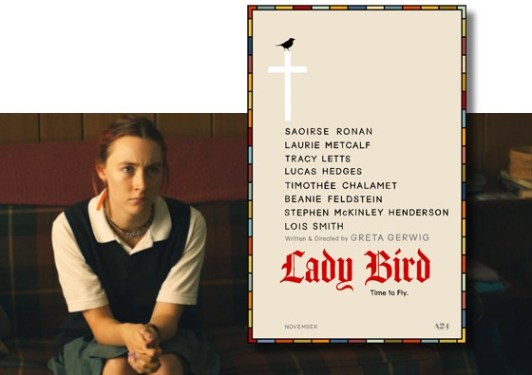 Actress Greta Gerwig known for being an indie specialist usually appearing in avant grade films makes a confident debut as a writer and director with Lady Bird. This movie is clearly autobiographical since the main character Christine ‘Lady Bird’ McPherson is living in Sacramento, where Gerwig is from, and it follows Lady Bird through her senior year of high school during the 2002-2003 school year, when Gerwig graduated.

The opening shot is Lady Bird (Saoirse Ronan) and her mother (Laurie Metcalf) laying in bad sleeping while facing each other. This lets us know that it is predominantly going to be a story about the mother and daughter’s relationship and the final moment reinforces this as well. The first scene was a typical fight that a teenage daughter would have with her mother while driving in the car about her future goals and going to college. It was comical, felt realistic and would have been a hundred times better if the punch line moment was not ruined in every preview for the movie. That was a recurring problem with Lady Bird. A lot of the funniest moments have been spoiled in the trailers. Blame it on the marketing team, but it will be worth it if they get enough butts to fill the seats.

There was however, one hilarious moment that was thankfully not ruined in the trailers and it involves a football coach directing a high school play and it is one of the funniest scenes from any movie this year. There are also some very tender scenes between Lady Bird and her parents. But the moment that was most heartfelt involved Lucas Hedges, an Oscar nominee for last years Manchester by the Sea, breaking down and crying in front of Lady Bird. It was a moment that thousands of teens probably go through but is very difficult to accept and deal with emotionally and this movie does a good job at making the audience feel his pain. When they hugged it felt like more than just comfort but a necessity.

At times Lady Bird feels a lot like a Noah Baumbach film above all else. Which makes sense since Greta Gerwig has starred in several of his movies. Lady Bird’s themes are redundant from many other films, but it is still a pleasure to watch. The best aspect of Lady Bird is the acting, especially Saoirse Ronan. She has been nominated a couple times for Academy Awards already for Atonement (2007) and Brooklyn (2015), but make no mistake this is her best performance to date. She plays the title character so believably and natural you will forget that she grew up in Ireland. Her acting, along with Gerwig’s screenplay and direction captured senioritis during the last months of high school very well. They also encapsulate what life was like as a teenager fifteen years ago just before the internet and cell phones were such an invasive part of our lives. Plus, it does a great job at capturing a working class family surrounded by more upper class people. It is no fun being the poor kid in high school when everyone else seems to have so much more.

The performances from the entire cast were solid but a special commendation needs to go to Laurie Metcalf as her mother with a lot of heavy dialogue between her and her daughter and she balances comedic timing with dramatic effect look so effortless. By the time the movie is over one may wonder if Greta Gerwig has some serious mommy issues herself. Plus Tracy Letts does a terrific job as her father. He plays a middle aged man suffering from depression with a subtle elegance and realism it is important to praise his small role and hope that he does not get overlooked. This is what a lot of clinically depressed people really act like.

Lady Bird has a lot of other small moments that resonate such as the scene where she paints her pink room that she grew up in and goes over everything in a solid white. One of the most glorious scenes involved our main character getting on a plane and we see it taking off from the point of view of looking out the window, as if our Lady Bird is taking off and flying up and away. That would have been a great final shot, but instead we do get some epilogue scenes in Manhattan that were necessary thematically but could have been shortened. Overall, Lady Bird is a confident debut for writer/director Greta Gerwig and features some performances that should not be overlooked once award nominations start getting announced.