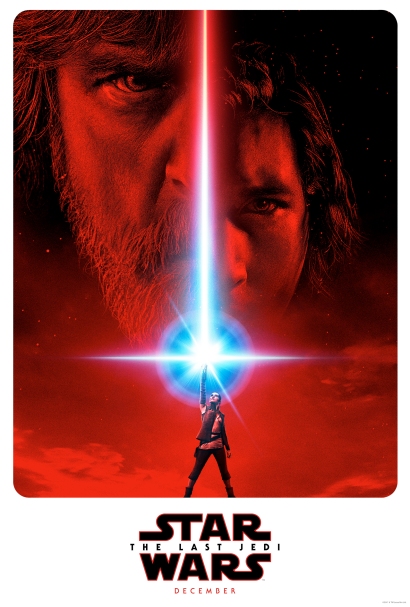 Sometimes bigger is better. Sometimes more is less. The newest entry in the Star Wars saga The Last Jedi, clearly agreed with the former and feels that bigger is better. Yet it ends up feeling like overkill and someone along the line should have stopped the producers and cut some of the excess fat from The Last Jedi. At 152 minutes long, there was ample trimming that could have been done. However, this movie they literally throw everything at the audience except the kitchen sink and unlike some uncooked pieces of pasta, most of The Last Jedi sticks and results in an undeniably fun fantasy adventure that deserves to be seen on the biggest screen possible.

The idea of a Star Wars movie every year does take some of the fun out of it and make each film less special. Waiting three years or more between each entry helped build up hype for each film no matter how insipid some of the prequels felt, there was still a sense that audiences were taking part in cinematic history. The Last Jedi starts off the same as the previous Star Wars pictures, with a text crawl catching the audience up with what events have transpired since The Force Awakens (2015) then a shot of the stars in space as the camera jumps to Imperial ships attacking a rebel base.

It was bittersweet to see Carrie Fisher as Princess Leia. Both she and Mark Hamill have more significant roles in The Last Jedi than they did the previous film. Her scenes have an extra layer of emotional impact to them since her untimely passing. Which makes it even more impressive that Mark Hamill is actually the best performance in the movie. He is terrific asa legend who is reluctant to be regarded as a hero because of his faults. The script is really tailored for Luke Skywalker to be the most nuanced character in the film with surprising revelations, but Hamill hits all the right notes in his performance and is so good he arguably deserves an Oscar nomination for Best Supporting Actor.

The other performances from characters introduced in The Force Awakens are good but nothing to write home about. Daisy Ridley, John Boyega, and Oscar Isaac were all going through the motions and even Adam Driver who is maskless as the villainous Kylo Ren for most of the picture seemed to give a more wooden performance than his first outing. Thankfully, The Last Jedi did not ruin any of the mystery from any of the new characters, just gave them some tasks to complete to help the resistance fight the bad guys and hold off the dark side of the force.

One of the biggest complaints about The Force Awakens was that it felt too much like a rehash of the original Star Wars Episode IV: A New Hope from 1977. Many people, including myself, was afraid that The Last Jedi was going to be a retread of its sequel The Empire Strikes Back (1980), thankfully this is not the case. The screenplay has enough surprises and as stated earlier throws so much at the audience that it tries to outdo the expectations most viewers bring to a Star Wars film. These attempts are not always successful but it is certainly a valiant effort at keeping the audience on the edge of their seat.

The cinematography is some of the best in a Star Wars film. Most notably the shots on Luke’s island which features some gorgeous nature photography. The color palettes emphasis of red stands out especially in General Snoke’s palace and his palace guards, reminiscent of Emperor Palpatine’s guards from Return of the Jedi (1983). Plus the use of red against white during a battle on an ice and snow covered planet project a sense of subtle urgency in a film with otherwise very little subtly. John Williams score also flawlessly enhances the visuals. The illustrious composer sat out from scoring last years Rogue One and his absence was apparent. When it comes to scoring a Star Wars film accept no substitutes. John Williams is the only option.

The Last Jedi has its weaknesses. Some sequences have so much CGI explosions they become mind numbing. A lot of scenes serve no purpose other than to further the plot. The film itself goes on too long and an unusual criticism of The Last Jedi is that women are given more predominant roles of strength and intelligence. Making females written as leaders should be a positive but it was kind of distracting making The Last Jedi feel more like a product of its time, than the earlier Star Wars films which remain timeless. The final shot of The Last Jedi is a potent one reminding the audience who these movies are for and why they should be important to the child in all of us. A big kudos should go to writer/director Ryan Johnson. The man who directed Brick (2005) and Looper (2012) has successfully transitioned to directing a Star Wars movie and a solid one at that. The Last Jedi is of the biggest and best blockbusters of the year.