‘Tag’ is It for Funny Bro-medy 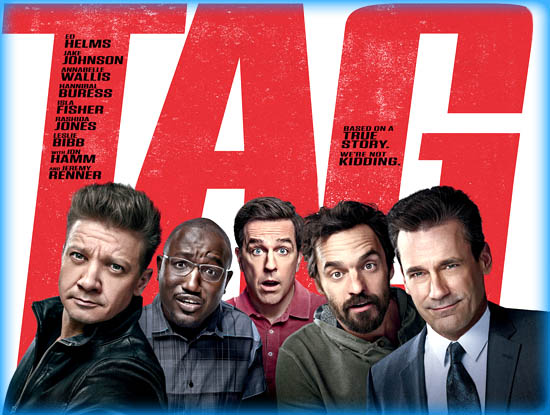 We have all played tag growing up. This movie is based on a true story of a group of friends that took playing tag to the next level, to adulthood and beyond. Tag is the rare comedy that gives good meaning to the words ‘bro humor’. This is not just a comedy for frat boys to get drunk to, it is a deep and oddly moving story at times about friendship and the bonds that we make and how continuing to act like children can bring friends together when they otherwise might have faded away years ago. Oh yeah, and it’s also pretty hysterical and will no doubt make frat boys and everyone else that watches it laugh out loud throughout.

The movie opens up with a hip hop song and reminds us that the film we are about to see is based on a true story. We then see images of boys running from each other and playing tag on a playground with narration from Ed Helms explaining the importance of how the game kept his group of friends together for thirty years. On the surface right away this could be just another dumb comedy for bros like the kind of humor Seth Rogen has become known for. But early on the film reminds us of the importance of staying young and close with your friends and that theme resonates throughout the rest of the movie. Tag could have been too preachy about the importance of staying young and keeping in touch with your childhood friends, but it seldom came across as preachy. It also could have gone in the other direction and been another run-of-the-mill comedy written by focus groups to target male audiences of a certain age, but honestly Tag can be enjoyed by just about anyone permitted to see an R-rated movie. This is one of the most crowd pleasing, jovial comedies in quite some time.

The themes are as important as the jokes and the dialogue flows naturally so none of the humor or crazy set pieces seem forced. One of the main reasons Tag is so successful is because the performances are believable throughout. Well, all except Isla Fisher as a wife obsessed with the game even though she is not allowed to play. Unfortunately Isla Fisher’s character was meant to be over the top, but she plays it so ridiculously it was hard to believe that her outbursts did not warrant the police being called right away nearly every time she opened her mouth. Her performance is a lesson in overacting, but at least she looked gorgeous while doing it. The rest of the performances by the men were not just one note characters but deep and multifaceted men each with their strengths and flaws, making them come across as real human beings, reminding us of people we know and are probably friends with. Special distinction should go to Jeremy Renner, not usually known as a comedic actor but he really shines in Tag as the one friend that has never been tagged in their game. Right from his characters intro to the audience knows they are in for some very enticing moments every time he is on screen.  This is one of the funniest performances of the year so far and I hope that Renner starts to sprinkle in some more comedies into his filmography since he seems to have a natural gift for it after such a seamless performance from a man most famous for his serious Oscar nominated roles in The Hurt Locker (2009), The Town (2010), and as Hawkeye in The Avengers movies.

Tag is far from a comedic masterpiece, but if you are looking for laughs and some harmless fun on the big screen this film hits a bullseye. It does take an unexpected dark turn near the end but that is probably only due to the fact that it is based on a true story and life is not always funny. Also kudos to the director, editor, and music supervisor for knowing exactly how and when to use well known songs to accentuate the action. Tag is never patronizing to its audience which is a rarity in most studio pictures these days. The final shot is a beauty that ties in perfectly with the opening shot and the themes of the film. Then right before the credits roll we get to see footage of the real life groups of friends playing their game that inspired the Wall Street Journal article that subsequently inspired the movie we just saw. Tag is ‘It’ for a fun time at the movies.