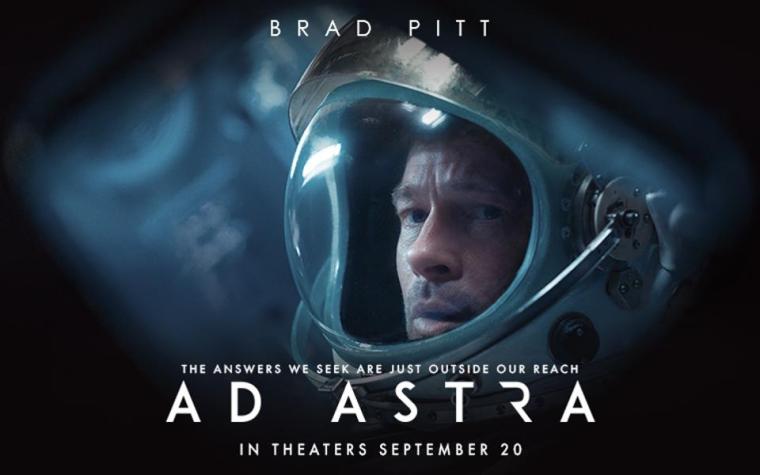 Writer/director James Gray, the most prominent invisible man in Hollywood, has returned with his first foray into the science fiction genre with Ad Astra. He got megastar Brad Pitt to sign on to his newest film so this may be his highest grossing picture with his widest release. All of James Gray’s films are critically acclaimed yet they fail to make an impact at the box office, nor do they earn award nominations or crack a lot of critics best of the year lists. Ad Astra may change that. This is his best film yet and explores a lot of the same themes his previous films mainly his most recent picture The Lost City of Z (2016) did about mans insatiable search into the unknown for something that does not exist in the real world. Ad Astra is a mesmerizing journey into space and a deeply moving picture into the heart of mankind examining the best of human courage and our weakest deep-seated fears.

The opening shot is a black screen with red light flares that turn green, then blue, and then reveal a sky full of stars as the camera pans to Earth and shows that we are in outer space. The lights at the beginning are meant to resemble electronic waves that are coming from outer space and are happening on a regular basis and a major threat to our planet causing cataclysmic destruction and massive loss of human lives. Ad Astra takes place in the near future and Brad Pitt is the son of a decorated astronaut (Tommy Lee Jones). His father disappeared on a mission near Neptune nearly thirty years ago. But new information was uncovered that his father may be alive, so Pitt’s character is recruited to go deep into our solar system to find the truth behind his father’s doomed expedition. What he finds may threaten our planet and known universe. Ad Astra is one of the finest realistic science fiction films in recent years. It has immersive cinematography with breathtaking sequences involving a free fall from a high tower on Earth, a rescue mission that is not what it seems, and a journey floating through rings on a planet. The camera work made me feel closer to the action than a normal film and want to lean closer to the screen to experience each moment.

As great as Ad Astra may be as a space adventure, it is even more successful as a story about fathers and sons and how their relationships, or lack thereof,  have such a monumental impact on our lives and therefore on our planet. This movie is a little heavy handed with the metaphors about saving the planet and salvaging our relationships with the ones we love, but it does so in a way that never comes across as patronizing or preachy. It is a cynical but realistic look at where our society is today and where we could end up in the future. Especially prescient is the movies pessimistic, capitalist view of commercial space travel. The richest of the rich can take their families on a lunar voyage to the moon and purchase a pillow and blanket on the shuttle for an extra 125 dollars. That sounds about right.

Ad Astra could be summed up in a sentence as Apocalypse Now (1979) in space. It took heavily from that movie and who would have thought that Joseph Conrad’s ‘Heart of Darkness’ novella would be this influential and used as a source for science fiction 120 years after it was published. Brad Pitt gives his second consecutive award worthy performance. Between Ad Astra and Once Upon a Time in Hollywood Brad Pitt is having an amazing year. As he goes further into space his mind descends deeper into madness. The metaphor of the darkness surrounding him is obvious but it works thanks to his convincing acting. There are a lot of close ups of Brad Pitt, he may be fifty-six but the women will certainly agree he has aged exceedingly well.

Ad Astra is ultimately about men’s fear of real life and real responsibilities like being a husband and staying around to be a father. Some men would rather abandon their real life to pursue a quest for extraterrestrials, much like the men in James Gray’s previous film The Lost City of Z ignored their responsibilities to go on a trek in the jungle for a fictitious city. This is a complex and impressive picture. One final footnote and it is an unusual coincidence but Ad Astra shares three actors from Clint Eastwood’s astronaut movie Space Cowboys (2000). Tommy Lee Jones, Donald Sutherland, and Loren Dean all star in both that film and reunited almost 20 years later for Ad Astra. Not sure if that was intentional but felt that it was worth mentioning.