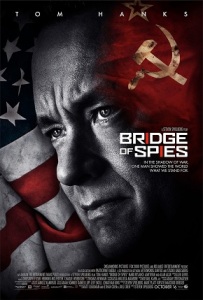 Bridge of Spies, the new Cold War drama from director Steven Spielberg and starring Tom Hanks opens up with a man looking at himself in the mirror as he paints a self-portrait. This lets us know that this picture is going to be a reflection of ourselves as much as it is a story about the Cold War.

The film takes place in 1957 right before and during the U2 spy plane incident with Francis Gary Powers. Hanks plays an insurance lawyer who is given the thankless task of defending a Soviet spy. The first half of the movie has elements of a solid legal thriller with Hanks in the courtroom acting on behalf of his client and making himself very unpopular to the American public. These scenes feature especially nice moments showing Hanks and the defendant in a very honorable light and how they refer to the US Constitution as “the rulebook” that makes them all American.

During the trial we are shown scenes with Francis Gary Powers, the pilot who would be shot down contrasting the spies on opposite sides and how they will eventually be used as bargaining chips for one another. The scenes of Powers and his U2 plane being shot down were thankfully kept to a minimum. It was well done but unnecessary. We all know what happens so there was no real reason to show it and the courtroom scenes were more compelling.

Then the second half of the movie involves Hanks’ character going to Berlin to negotiate Powers’ return in exchange for the man he defended and also a college student who was caught on the wrong side of the Berlin Wall as it was being erected.

When the film shifts to Germany the look and tone get a stark contrast to the first half. East Berlin is made to look like a demilitarized zone still in shambles from WWII. The color palette is much more drab and it is brutally cold and often snowing. The constant use of Tom Hanks drinking hot beverages and using tissues are details reinforcing the bitter and merciless setting.

Throughout Bridge of Spies the cinematography contains a lot of low-key lighting with very soft and muted colors. Considering its historical context it would have looked even better if it were shot in black and white, but surely the producers did not want to go that route because it would decrease its box office revenue which is a shame. The movie has an old-fashioned feel to it and that would have enhanced the experience.

For the most part Spielberg does a very good job with the direction of this picture. It was sharp-witted the way he juxtaposed court scenes with a quick edit of children saying the pledge of allegiance. One of Bridge of Spies strongest qualities is its ability to touch on how the Cold War in the late 1950’s affected all aspects of American life. Plus Spielberg and his star Tom Hanks both inject a good sense of humor throughout the movie always making it feel natural and never forced, adding to the realism yet never taking away the gravity of the situations.

The weakest aspect of Bridge of Spies was once again Spielberg himself, not knowing when to end the picture at the right moment. As he did with his most recent and overall superb film Lincoln (2012), Bridge of Spies goes on about ten minutes too long. The final scenes were an epilogue that we did not need. There is a moment (on a bridge coincidentally, tying into the double meaning of the title) that would have been a perfect place to have the end coda and roll the credits, but Spielberg added superfluous scenes at the end that added no emotional impact.

That being said, the positive aspects clearly outweigh the negative and not only is Bridge of Spies a very good picture but its biggest strength is how it parallels our current political climate with the Cold War. The obvious comparison of the cameras on the U2 spy plane with our governments “big brother” mentality since the Patriot Act and how easy our government can spy on us or how we can watch each other with drones or even just using Google Earth. Also topical were the shots of the Berlin Wall being constructed as Republican Presidential candidate Donald Trump would love to see a similar wall put up between the United States and Mexico. These are just some of the small touches that add up to making Bridge of Spies an intelligent and worthwhile film.