Three is the Charm for ‘Kung Fu Panda’ 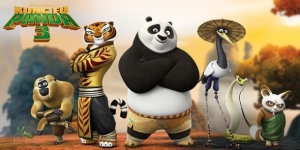 Kung Fu Panda 3 has been a long anticipated movie. The ending of part two left the audience wanting more!

Kung Fu Panda 3 is a movie that you should definitely take your children out to see. It was a nice movie for all ages.

I found it interesting that the first two movies were directed by just Jennifer Yuh Nelson, a director and a storyboard artist. She did a great job directing these two movies herself. Then, for the third movie, she brought in someone by the name Alessandro Carloni to help her along the way.

448 different people helped with the main production of this movie which really made it interesting because the movie took about 21,000 hours to make. It was a lot of work for this many people to produce such a movie.

This movie consisted of a wide range of actors and actresses, varying from Jack Black to James Hong. Their characters worked together well and made the movie flow smoothly. Jack Black still played the well-known dumb but funny character Po. His character showed a lot of strength and growth throughout the movie, but we won’t go too into that until you watch the movie.

Like the first two movies, Kung Fu Panda 3 has the five main fighters go out to save the rest of China. But, in the third one, there’s a special twist that you have to just see to find out.

Kung Fu Panda opened one weekend with a $57 million launch in China, completely blowing Minions at $50 million in the first eight days.

A lot of the CGI in this movie was extremely colorful and eye-appealing to younger viewers, which is part of the reason why the movies have gotten good feedback.

The Kung Fu Panda movie series features several different themes that appeal to everyone, for example friendship and family. DreamWorks Animations really hits it hard on this one making it worth the watch.

And, as Po would say, SKADOOSH!