Skip to content
Actors That Should Come Out of Retirement Part 6: Julie Christie
Editorials

Actors That Should Come Out of Retirement Part 6: Julie Christie

by Jason F. Koenigsberg One of the more enigmatic careers of any actress in movie history, Julie Christie is sort of like the female Warren Beatty, although she is British […] 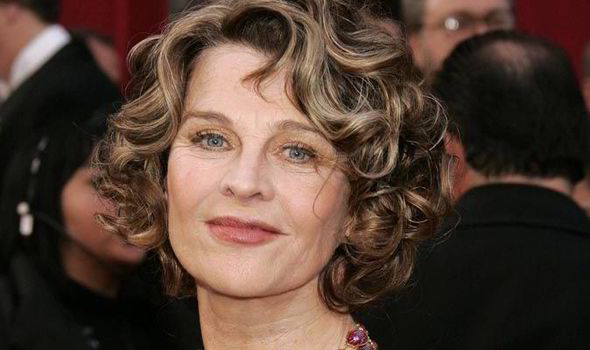 One of the more enigmatic careers of any actress in movie history, Julie Christie is sort of like the female Warren Beatty, although she is British and has formally announced her retirement on several occasions over the past four decades only to come back to acting. Beatty was her romantic partner for a few years during the 1970’s. They starred together in McCabe and Mrs. Miller (1971),  Shampoo (1975), Heaven Can Wait (1978), and even though he takes long breaks between movies, Beatty has never formally quit acting, only taken sabbaticals to work on political campaigns. Both are extremely selective when choosing projects to work on and both have won an Oscar on several nominations. She is notorious for turning down roles that turned out to be major successes like American Gigolo (1980) and Reds (1981). I also think that it is interesting that Julie Christie is the first woman to headline this column. Most women her age have trouble getting parts as an older lady, but not Julie Christie. She continues to receive offers and rejects them. Many of her peers are still acting in smaller roles or not in major motion pictures. If Ms. Christie wanted to she certainly could still act, but has made the conscious decision not to and enjoys retirement and spending time with her husband.

Julie Christie got started acting in her early twenties and had big roles in her first few movies Crooks Anonymous (1962), The Fast Lady (1962) and Billy Liar (1963). But then she had a banner year in 1965 with three lead roles in three of the years biggest and best films The Young Cassidy, Darling, (which she earned her first of four Academy Award nominations for Best Actress and would win her only Oscar to date) and David Lean’s grand romantic epic Doctor Zhivago. Few actresses have had a career year as strong as Julie Christie had in 1965.

Her best performance is very tough for me to say. She has been great in everything but I am torn between an early role in her career as a grieving woman in Nicholas Roeg’s delectable thriller Don’t Look Now (1973) and her more recent turn as a woman suffering from Alzheimer’s disease in Away From Her (2007). She was equally enchanting in both and they are two completely different types of roles in very different movies at opposite ends of her career. She should have won an Oscar for both. The Academy neglected to nominate Julie Christie for Don’t Look Now but she was nominated for Away From Her, the actresses fourth and thus far final Oscar nomination.

That would have been a great role to end her career on, but since then she has starred in a few mediocre movies such as Glorious 39 (2009), Red Riding Hood (2011), and The Company You Keep (2012). All of which are head scratchers for someone known for being very choosy on what roles she accepts. I could understand her wanting to be directed by Robert Redford and star opposite him and Shia LaBeouf in The Company You Keep, but to star in the Twilight clone Red Riding Hood? Maybe she wanted to buy a new house or something like that. Regardless, Julie Christie has an a unique career for an actress and showed that she can still bring her A-game to the roles she played as an older lady. She looks great for her age and has not acted in a film since 2012, it would be wonderful to see her on screen in one last great role.